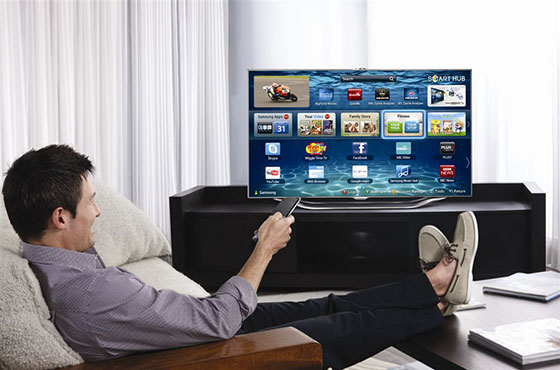 Samsung’s Latest Smart TV Has a Dark Side

We may all have heard the saying: Big Brother is watching you. How about ‘Big Brother is listening to you’ all the time? This big brother is no one but the latest smart television by Samsung. According to The Daily Beast, the latest smart TVs from the Korean electronics giants house an exciting new voice-command feature.

The idea is for you to communicate with the television set without the use of traditional remotes and is activated when a microphone shows up on screen. It sounds really awesome but there is a dark side. Apparently, anything and everything you say in front of the ‘smart box’ can be recorded and delivered to third parties.

According to Fortune, Samsung’s privacy policy that comes with the televisions reportedly state: “Please be aware that if your spoken words include personal or other sensitive information, that information will be among the data captured and transmitted to a third party through your use of Voice Recognition.”

It is advisable to avoid confidential and sensitive conversations while watching your favorite television shows. It may also be better to refrain from expletives. The other danger is that since these televisions are ‘smart’ they are connected to the internet. This means your device could be compromised by hackers who can use your confidential conversations for their own mischief.

However, it is not all doom and gloom. The voice features can be turned off. Samsung’s official response reiterates that “Voice recognition, which allows the user to control the TV using voice commands, is a Samsung Smart TV feature, which can be activated or deactivated by the user. The TV owner can also disconnect the TV from the Wi-Fi network.”

So if you want vocal freedom in front of the latest Samsung SmartTV, then its best to keep it offline or turn the voice command features off. It is always better to be safe than sorry!