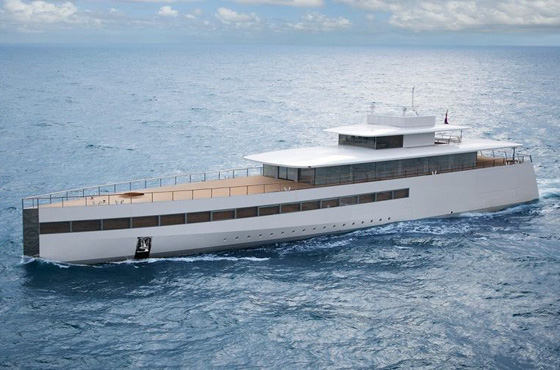 Apple creator Steve Jobs’ superyacht – the Venus is truly a sight to behold. However, due to the tech guru’s unfortunate passing in 2011 the yacht to end all yachts never even had to opportunity to set sail.

Named after the Roman Goddess of Love, the Venus is a revolutionary sloop made entirely of aluminum. 260 ft long with 10 ft high windows, this mammoth of a beast was custom-built for the Apple genius.

The Venus is unlike any other yacht. It somewhat reflects the personality, taste and vision of its owner thanks in-part to the work of the Dutch custom-yacht manufacturers Feadship. The cerebral sailboat was designed by famed French designer Philippe Starck, who himself is a great fan of both ships and the sea.

It seems designing it was the easy part for Starck, but completing it to meet the lofty standards of its perfectionist owner was another story altogether. One of the most technologically-advanced yachts in existence, the Venus is somewhat reminiscent of the design for the new Apple campus in Cupertino, California…

Coincidence? We think not!