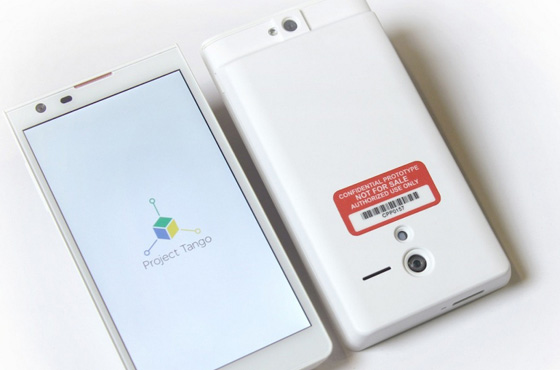 The California-based tech giant said its “Project Tango” would provide prototypes of its new smartphone to outside developers to encourage the writing of new applications.

Project leader Johnny Lee said the goal of the project, which incorporates robotics and vision-processing technology, is “to give mobile devices a human-scale understanding of space and motion.”

“What if you could capture the dimensions of your home simply by walking around with your phone before you went furniture shopping?” Google said on its Project Tango web page.

“What if directions to a new location didn’t stop at the street address? What if you never again found yourself lost in a new building? What if the visually impaired could navigate unassisted in unfamiliar indoor places? What if you could search for a product and see where the exact shelf is located in a super-store?”

The technology could also be used for “playing hide-and-seek in your house with your favourite game character, or transforming the hallways into a tree-lined path.”

Smartphones are equipped with sensors which make over 1.4 million measurements per second, updating the position and rotation of the phone.

Partners in the project include researchers from the University of Minnesota, George Washington University, German tech firm Bosch and the Open Source Robotics Foundation, among others.

Another partner is California-based Movidius, which makes vision-processor technology for mobile and portable devices and will provide the processor platform.

Movidius said in a statement the goal was “to mirror human vision with a newfound level of depth, clarity and realism on mobile and portable connected devices.”

“Google has paved the future direction for smart mobile vision systems and we’re excited to be working with a company that shares our vision to usher in the next wave of applications that fundamentally alter how a mobile device is used to experience the world around us,” said Remi El-Ouazzane, Chief Executive of Movidius. “Project Tango is truly a groundbreaking platform and we look forward to seeing the innovation the developer community achieves”.