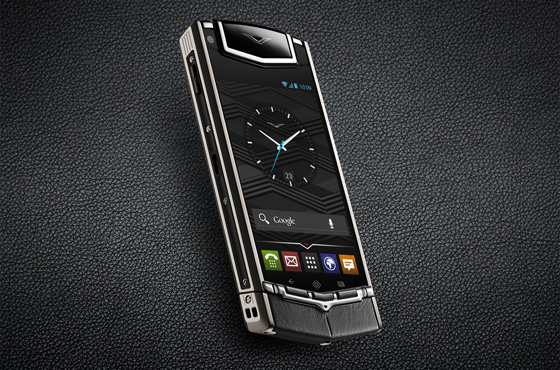 England-based luxury phone manufacturer Vertu has released its very first smartphone model to market. Even though it was once owned by Nokia, the brand has since opted for Google’s Android operating system over rivals Windows and Symbian technology.

Though the technology offers nothing new, the phone’s specs are nonetheless impressive. The Vertu Ti runs Android 4.0 with an ice-cream sandwich operating system, which though is not the latest, is upgradable. It’s packed with a dual-core 1.7 GHz processor, 1 GB RAM, 64GB internal memory and Bang & Olufsen tuned speakers. It boasts Near-Field Communication, has an 8-megapixel back-camera with 1080p video, plus a 1.3 megapixel front-camera.

Perhaps the most impressive feature of its appearance is its 3.7 inch “virtually scratchproof sapphire crystal screen”. Not the mention the unit is manufactured from a grade 5 titanium-built casing.

But probably its most luxurious feature has to be the concierge button on the right side to summon a 24-hour concierge, who can serve as your personal assistant, handling your whole routine from making restaurant reservations to picking up your dry-cleaning.

Another luxury application that comes pre-installed on this unit is ‘Life’, where sites and events of your interest judging from your interactions with the concierge, are compiled in a personal list of recommendations. Then there’s ‘Certainty’, which links you to a security firm that can help you run background checks and even arrange for your personal security.

According to the latest reports, there are only 326,000 Vertu smartphone owners in the world, after a decade in the industry. And chances are the Ti smartphone won’t do anything to improve sales as the unit price of this phone ranges anywhere between $10,000 to $22,000, depending on the model. But like the Bentley-drivers and Ducati riders and First Class-fliers the Ti does accomplish one thing, it puts you in a league of your own.