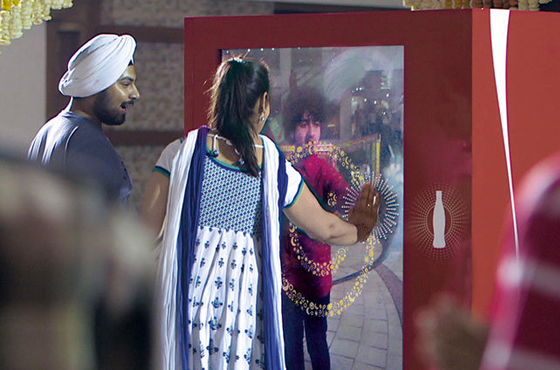 Coca-Cola, one of the largest multinational brands in the world, looks to unite people of India and Pakistan through an innovative new idea. Interactive vending machines have been set-up in shopping malls across Lahore and New Delhi that encourage consumers to ‘make a friend’ across the border.

Though India and Pakistan once stood united and still share many cultural and historical links relations between the two countries have been fraying particularly, over the last couple of years. It appears the only thing the two independent nations now share is a mutual sense of suspicion and hostility. Yet, Coca-Cola seeks to provide people of both countries with a renewed sense of friendship.

Coca Cola’s ‘Small World Vending Machines’ is a portal that initiates live interaction between people of both cities. 3D touch screen technology is used to project a live-streaming video on the screen of the vending machine that records your exchange. The technology used in these vending machines is very similar to Skype or Apple’s FaceTime. Strangers from across the border are encouraged to offer a friendly greeting or complete a friendly activity.

The company hopes to inculcate feelings of peace and brotherhood, and spread tolerance between people of both nations. Coca Cola is working to produce a film on the emotional exchanges captured on these machines of different people from all walks of life.

In a press conference Saad Pall, Coke’s Assistant Brand Manager Pakistan, said “The people of Pakistan and India share a lot of common passions and interests – from food and Bollywood movies, to Coke Studio music, to cricket.”

“What this project did was connect people who are not exposed to each other on a daily basis, enabling the common man in Lahore to see and interact with the common man in Delhi. It’s a small step we hope will signal what’s possible.”

One can’t deny it’s a novel idea… We just hope it’s one that works!