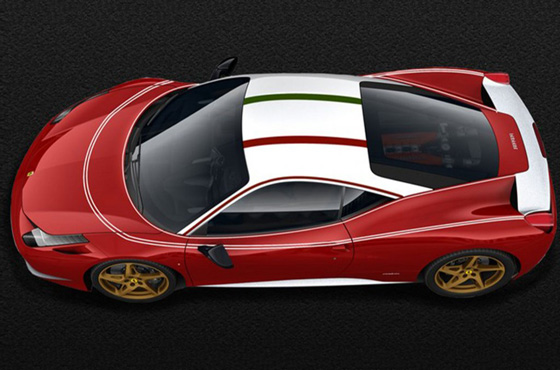 Italian supercar manufacturer Ferrari is proud to introduce a truly-limited edition 458 Italia dedicated to Austrian racing legend Niki Lauda. The former Formula One racecar driver has won three world championships and was recently immortalized on the big-screen in the Hollywood blockbuster ‘Rush’.

The 2013 biographical sports drama directed by Ron Howard, focused on the 1976 Formula One season and rivalry between racing legends James Hunt (played by Chris Hemsworth) and Niki Lauda (played by Daniel Bruhl). Niki Lauda remains heavily involved with the sport serving as Chairman of the Mercedes AMG Petronas F1 team, though his legacy as a racecar driver remains to this day with team Ferrari.

The one-off Ferrari dubbed the ‘Niki Lauda Edition’ has been manufactured to resemble Lauda’s former F1 car. Painted in Rosso red the car features a white roof and comes complete with gold rims and an Italian flag motif inside and out. Mechanically, there is no change to the car. It draws its power from a “standard” 4.5-litre V8 engine that boasts a zero to 100 time of less than four seconds with a top speed of 320 KPH.

All of the styling elements were carried out at Ferrari’s Maranello Style Centre, and while the ‘Niki Lauda Edition’ isn’t a production model; if you’ve got the cash it shouldn’t be too difficult to customize a similar edition of your own.