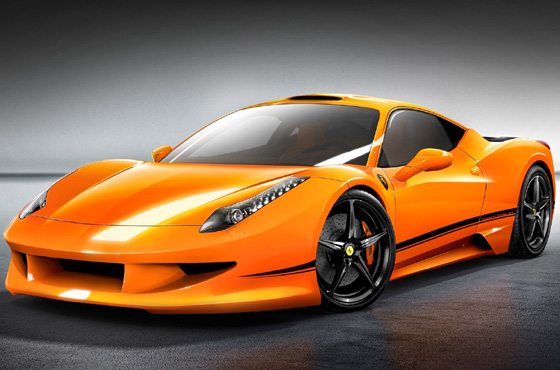 Ferrari brings to you its latest pimp mobile: The 2014 Ferrari 458 Italia

Replacing Ferrari’s legendary F430 was a task that was once said to be ‘undo-able’. The fine balance in specifications, the sheer class of meticulous design, and the relative affordability earned it a place in the pantheon of great Ferraris.

Today however, a new beast prowls the streets in its place; the Ferrari 458 Italia. Burning a devilish $260,000 hole in your pocket this menacing machine has taken the once-perceived-as-insurmountable challenge and arrogantly cantered to victory.

The latest model isn’t very different from the original version, first unveiled in the 2009 Frankfurt Motor Show. The 4.5 liter V8 engine churns out a staggering 570 horsepower and nearly 400 pounds of torque. In layman’s terms this means that the heir to the F430 can take you from 0-100 km/h in a scant 3.4 seconds: arrogant indeed!

The supercar is only available in a 7-speed automatic transmission with rear-wheel-drive, and despite the wish of many Ferrari enthusiasts for the 2014 model to be all-wheel-drive, you simply do not argue with the boys at Maranello.

In reality, the 458 Italia is even faster on the track than it is on paper. In testing, the Italian Stallion has been known to bolt from 0-100 km/h in 2.9 seconds flat. Furthermore, the stated top speed of 325 km/h can also be breached. All this is in no small part due to the model’s fabulous design. Designed by Pininfarina to maximize aerodynamic efficiency, the winglets on the front of the intake actually deform as the car goes faster, cutting drag time and increasing down force. Consequently, the designers at Maranello have also made it so just the sight of the 458 Italia leads to ‘immediate viewer jaw displacement’.