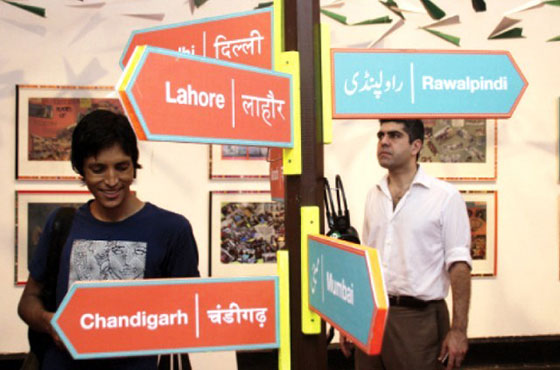 Changing Hearts and Minds Through ‘Exchange for Change’

The Citizens Archive of Pakistan (CAP) worked alongside Routes2Roots (R2R) to complete an 18-month initiative titled ‘Exchange for Change: Pakistan India 2013-15’. According to Dawn, the works of 5000 students enrolled in schools from both Pakistan and India were presented to the public at the National Art Gallery in Islamabad.

Both CAP and R2R showcased ‘Exchange for Change: Crossing Borders’ which tells the story of Namrita and Qasim whose journey began 18 months ago “with a letter that changed hearts and minds.”

Since the project’s completion, CAP has organized exhibitions showcasing the correspondence between participants of both sides. ‘Crossing Borders’, for example presents the values shared between a girl and boy from Pakistan and India respectively who met via the exchange program. According to the Express Tribune, the exhibition “featured letters, postcards, collages and oral histories that were exchanged as part of the program.”

CAP Executive Director Swaleha Alam Shahzada was quoted by Dawn saying, “We had 30 students from Pakistan, 15 teachers and five members of the CAP team, so it was a delegation of 50. The kids were selected from various schools of Karachi, Lahore, Rawalpindi and Islamabad.”

This is the first time a project of this calibre has been undertaken between the neighboring nations in an attempt to promote better relations between the two. The idea was to show that a healthy dialog can happen between people of both countries despite our political differences.

Lubna Nisar, an instructor at Islamabad’s ASAS Foundation who joined the students on this exciting journey, was quoted in the Express Tribune saying, “We realized that everything over there is the same as it is here. The locals welcomed us warmly and entertained us. When someone would come to know that we were from Pakistan, they would go out of their way to make us feel comfortable.”

Namrita and Qasim and several other participants encourage citizens of both nations to engage in a peaceful dialog and realize that ultimately, we are more similar than we think!