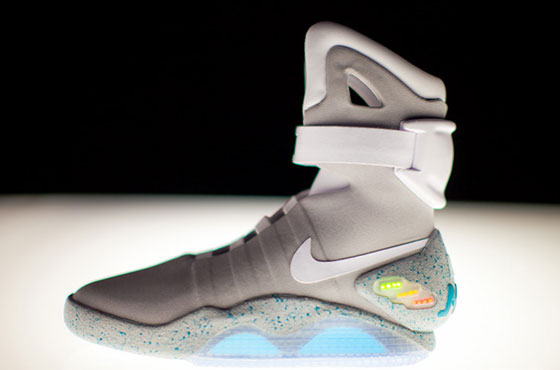 ‘Power Laces’ Sneakers Back From the Future!

Imagine growing up watching ‘Back to the Future’ and thinking of the zany inventions in the film trilogy come to life in the year they were predicted. Now you do not need to since Nike is making it happen. According to Mashable, Nike are getting ready to release the ‘Power Laces’ shoes from ‘Back to the Future II’ which was based in the year 2015.

We do not ride hoverboards yet, but at least we can now wear these awesome self-lacing Nike sneakers. These will be retailed as ‘Nike Air MAG’ and this was confirmed by Nike’s innovation chief Tinker Hatfield at a trade show in Long Beach, California.

According to Nike Kicks, no release date is yet known but Hartfield mentioned that there are “11 and two-thirds months left in 2015.” The shoes were first previewed in a promotional video by Nike in 2011.

The same year, 11,000 pairs of Nike Air MAG were auctioned off to raise funds for the Michael J. Fox foundation. The actor had starred in the trilogy as Marty McFly and it became one of his most memorable appearances on screen.

The fans will surely look forward to the Nike Air MAG, but anyone not exposed to the film may not like the gimmick. All we need now is the return of flying Delorean time machines, and we can go ‘back to the future’!