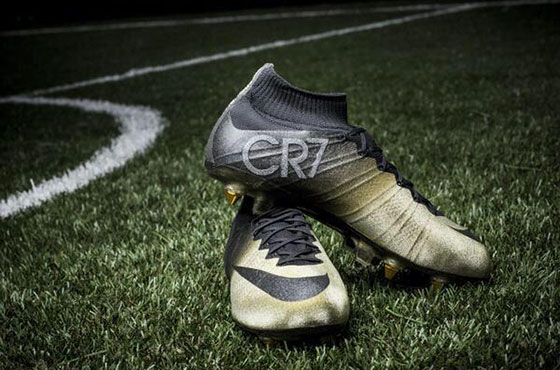 Cristiano Ronaldo Wins a Pair of Golden Boots from Nike

After winning the Ballon d’Or, otherwise known as ‘World Golden Ball’, Cristiano Ronaldo also won himself a pair of golden boots. According to the Daily Mail, these shiny golden boots were gifted to the Portuguese sensation by Nike.

Nike calls the shoes ‘’Mercurial CR7 Rare Gold’. The color apparently signifies all his accomplishments of last year. According to Nike.com, “For the first time in Nike history, micro-diamonds have been applied by hand to the CR7 logo of the boot.” These golden shoes are designed exclusively for the golden feet of Ronaldo himself.

Ronaldo has had a phenomenal 2014. In one year, he won a plethora of silverware including UEFA Champions League, Copa Del Ray (Spanish Cup), European Super Cup, Club World Cup and his third Ballon d’Or.

The Real Madrid winger is now one Ballon d’Or short of Lionel Messi who has four. This is also Ronaldo’s second straight win after being voted as winner in the 2013 awards.

Ronaldo was one of the three finalists that also included Messi and Bayern Munich goalkeeper Manuel Neuer. NBC Sports quoted the former Manchester United star after his win at this year’s awards saying, “It’s been an unforgettable year. To win this trophy, a trophy of this kind, is something unique and all I can say is I want to continue working as I have so far, trying to go on to more titles – individual and as a team – for my mother, my father who is up there looking at there and my son. I can see my mother, my family. I would like to thank all those who voted for me. My coach, my fellow players, the president of my club. I want to get better as the days go by. I want to say to all the Portuguese that I never thought I could win this trophy on three different occasions.”