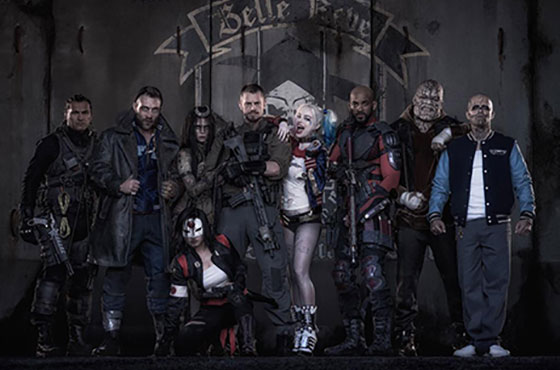 Last week, ‘Suicide Squad’ director David Ayer took to popular social micro-blogging platform and gave us a look at Jared Leto’s take on the Joker. Leto was shown in full make-up and body tattoes giving the idea that this time the Clown Prince of Crime will be much different than seen before on film and television. According to Hypebeast, Ayer returns this week to show us the full team photo of the ‘Suicide Squad’ all geared up and ready for action with the tweet, “Task Force X assembled and ready. #SuicideSquad.”

Some of the notable mentions among the star-studded cast include Will Smith as Deadshot, his ‘Focus’ co-star Margot Robbie as Harley Quinn and Cara Delevingne as the Enchantress. According to CNET, the full cast from left to right are as follows: Adam Beach as Slipknot, Jai Courtney as Captain Boomerang, Cara Delevingne as Enchantress, Karen Fukuhara crouched down in front as Katana, Joel Kinnaman as Rick Flagg, Margot Robbie as Harley Quinn, Will Smith as Deadshot, Adewale Akinnuoye-Agbaje as Killer Croc and Jay Hernandez as El Diablo.

Will Smith appeared solo in his trademark assassin mask and eyepiece in another tweet by Ayer. Fans of the ‘Bad Boys’ star will most certainly be looking forward to his performance as Deadshot.

2016 looks to be an exciting year for DC Comics fans. Other than ‘Suicide Squad’, the hotly anticipated ‘Batman vs. Superman: Dawn of Justice’ in March 2016. ‘Suicide Squad’ will follow on August 5, 2016.