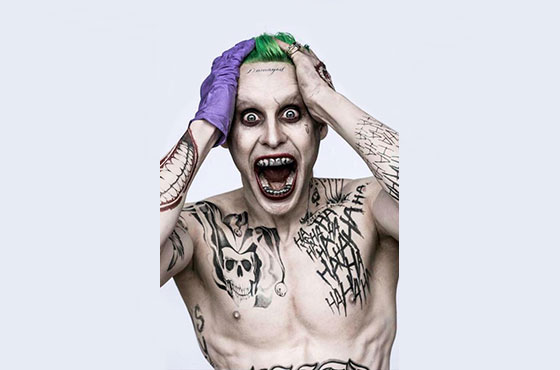 So many actors have portrayed the Joker on screen. One of the first major incarnations of the Clown Prince of Crime was Cesar Romero in the 1960s Batman show. Perhaps the first best modern interpretation of Joker was by Jack Nicholson in Tim Burton’s ‘Batman’. The last person who arguably equaled or bettered Nicholson’s performance was the late Heath Ledger.

The latest man to take on the iconic role is none other than Jared Leto in the upcoming ‘Suicide Squad’. Director David Ayers tweeted a photo of Leto as the Joker and in comparison to previous incarnations, this one is totally insane. Cinema Blend states that “While he [Joker] retains his trademark green hair and red lips, his pale skin looks more fleshed-toned compared to the chalk white hue from the comics. The purple glove adds more familiar color, while you’ll notice on his left hand he has a pinky ring. Evidently this is a Joker who likes the bling.”

The other noticeable difference is the presence of tattoos covering his entire body which include ‘ha ha’, ‘skull’, ‘cards’ and even a wide smile on his arm. To top it all off, the word ‘damaged’ is inscribed on his forehead. This Joker is completely crazy. He may not be the maniacal Joker from ‘The Dark Knight’ or the hysterical version of Burton’s ‘Batman’. He is simply nuts.

The Joker will reportedly be imprisoned in most of the film and hence carries that inmate look. Regardless of what the fans would think, it is great to see a different take on the Joker while respecting the previous incarnations. Nicholson and Ledger set the benchmarks for the Clown Prince of Crime. Will Leto top their performance? We will have to wait and see when ‘Suicide Squad’ releases on August 25, 2016.