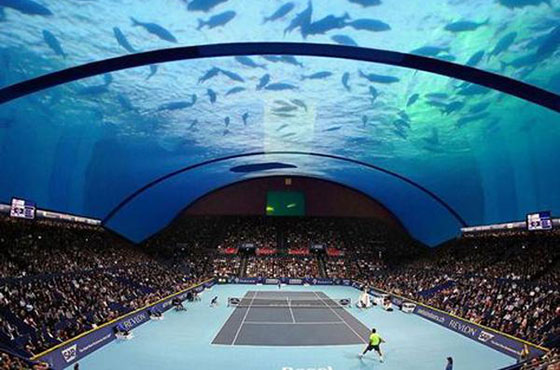 Have you ever imagined watching a live tennis match between Roger Federer and Rafael Nadal under water? It looks like Dubai may be the first to host such an event. According to Arabian Business, Polish architect Krzysztof Kotala is pitching concepts of an underwater tennis center by the coast of Dubai hoping to attract local investors so they can make it happen.

Kotala is highly qualified and holds a Master of Science degree in Architecture from Kraków Polytechnic and is owner of the 8+8 Concept Studio in Warsaw. He has not identified potential backers for his underwater tennis stadium yet. Arabian Business quoted Kotala saying, “There is not an investor but I would like to get interest as I think it is a good idea.” It most certainly is not just good but an awesome idea if it gets realized.

“This will be something original. This should be somewhere where there is the tradition of tennis. Dubai is perfect for this idea,” Kotala said in reference to the Dubai Duty Free Tennis Championships held in the emirate for over two decades and this would be a combination of “technology, ecology and sport.” Sport360 reports that the tournament is currently played at Dubai’s Irish Village.

The underwater tennis stadium would be the first of its kind and one can imagine it an unbelievable and breathtaking experience. If this project comes to reality, then we must all add it to our bucketlist. Watching tennis live will never get better than this!