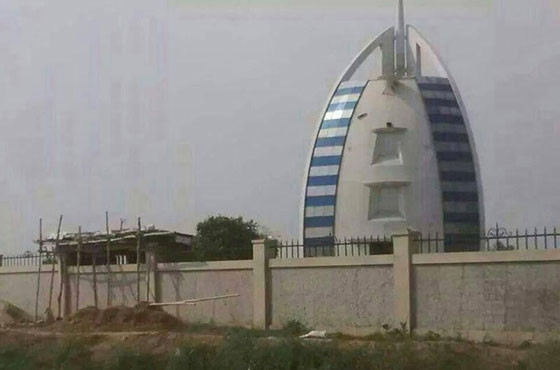 India Takes On Dubai with the ‘Burj Ali’

Dubai’s Burj Al Arab has many admirers and would you imagine one of them would try to recreate the majesty of one of the world’s tallest buildings? According to Arabian Business, an Indian man by the name of Rajinder Kumar is the owner of a farmhouse hotel that has an uncanny resemblance to the Burj.

Kumar has never visited Dubai and states that he has not been contacted by the authorities at Burj with regards to his replica. Kumar was quoted by Arabian Business saying, “Personally, I have not got any notice of legal action. But yes, while browsing the Internet, I had once read that owners of Jumeirah beach might take legal action. But I think we are in our country and are free to do so.”

The replica known as Burj Ali is only three stories tall compared to the 280 meter tall Burj Al Arab. Kumar had a triangular-shaped plot of land which he decided to convert to the Burj Ali. The real Burj was completed in 1999 by Jumeirah Group and its legal team have awareness of the replica. However, no legal challenge has been made against Kumar as yet.

The fake Burj is located in the Phagwara village in Indian Punjab and has become a favorite of the village residents who like to enjoy the food at competitive prices. One Burj Ali patron Balbeer Singh Padham was quoted by India Today saying, “I know that this is in Dubai. Even now when I talk to anyone in Phagwara, I say okay, let’s go to Dubai today. We refer [to] this place as Dubai.”

While the miniature Burj Ali is a somewhat decent attempt in capturing the splendor of the real Burj Al Arab, nothing beats the original. As it has been said, imitation is the sincerest form of flattery but we are not sure if Jumeirah Group are in the least flattered.