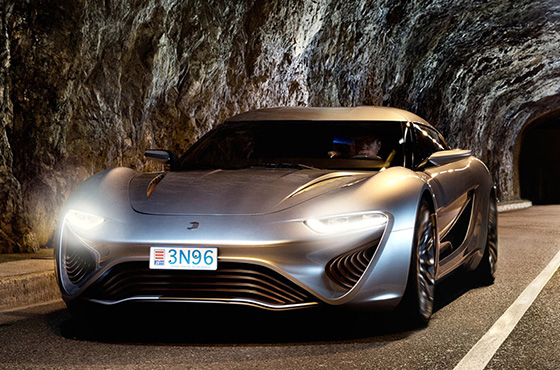 Believe it or not, the Quant ‘e-Sportlimousine’ is a salt water powered electric super car. Unlike traditional hybrids that run on a combination of petrol and electricity, the Quant e-Sportlimousine runs solely on electricity. It is powered by a revolutionary electrolyte flow cell system that has the capability to produce an astonishing 920 horsepower (680 kW).

The flow cell system – developed by NanoFlowcell – generates electricity from an electrochemical reaction between two electrolyte solutions. This energy is stored in the car’s super-capacitor-batteries, and is then forwarded to four electric motors. As reported by Green Car Congress, an electrolyte flow cell is: “Flow cells combine aspects of an electrochemical battery cell with those of a fuel cell. The electrolytic fluids in flow cells — usually metallic salts in aqueous solution (salt water) — are pumped from tanks through the cells. This forms a kind of battery cell with cross-flow of electrolyte liquid.”

Unveiled at the 2014 Geneva Auto Show, the e-Sportlimousine’s engine produces 920 horsepower and a frame-contorting 2,139 foot pounds of torque! The manufacture claims it can accelerate from 0 to 62 mph (100 km/h) in just 2.8 seconds, and boasts a top speed of 217 mph (350 km/h). With a full tank of ionic fluid (a fancy way of saying salt water), the car has a range of about 373 miles…but until your friendly-neighborhood gas station features a salt water pump, you might wanna drive along the coastline just to be on the safe side. But then again, if you can afford the car’s $ 1.7 million price tag, you can surely dish out some change for a salt water filled jerry can.

In a recent announcement, the Quant e-Sportlimousine, was certified for use on European roads. This is a huge step away from the current generation of fossil fuel powered cars – a big blow to the oil manufacturing corporations who have held a tight noose around the energy market since the early 1900’s, discrediting forms of alternate-energy for fears that it may take a chunk out of their already overflowing petro-lined pockets.

Although electrolyte flow cell technology has been around for a while, it wasn’t until recently that manufacturers were given the go-ahead to start producing these efficient green machines, citing environmental concerns. If executed correctly, this technology has the potential to make gasoline powered cars redundant – now that’s something oil cartels will fight to the last breath!