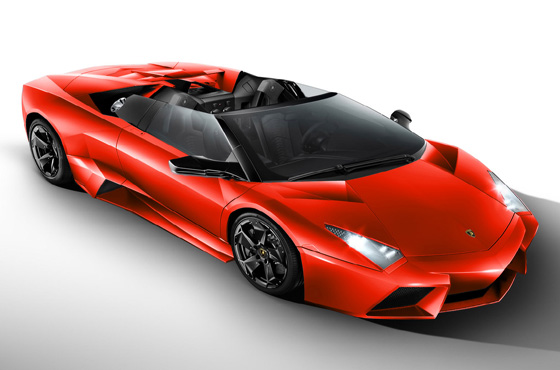 Lamborghini’s Reventon: A Shot between the Eyes

Although he died more than two decades before Lamborghini was even founded, were it not for the Spaniard Felix Guzman the car pictured above would certainly not have been called the Reventón. Named after a fighting bull (in keeping with Lamborghini tradition) Reventon was the legendary beast that in 1943 slay Guzman, one of the world’s most prominent bullfighters.

The word loosely translates from Spanish to mean “burst” or “explosion,” rather fitting for this explosive new machine. The Reventon is the most extreme, exotic and rare supercar manufactured by the company to date. It also ranks as the most powerful and expensive costing approximately one million Euros (before taxes, naturally).

Although early rumours indicated the total number manufactured would be at around 100, Lamborghini later revealed the number to be as as low as 21. Of these, only 20 are for sale and have been offered to favored Lamborghini collectors with the last one to be displayed at the Lamborghini Museum near Bologna. Each Reventón is clearly stamped with its production number between the driver and passengers seats.

Although the exterior is all new, almost all the mechanical elements, including the engine are taken directly from the Murciélago LP640, featuring an all-new carbon fiber exterior.

Modeled after a military fighter-jet, the Reventon is rare enough to make even the Bugatti Veyron look common. Designers at Lamborghini wanted a car that looked like nothing one had ever seen before. A supercar to capture the imagination and take ones breath away.

Like the jet it was modeled after, the Reventon looks as if it too were designed with super stealth capability. Its crazy angles and well-defined lines continue for great distance before taking off on some new, zany tangent. It’s so easy to be carried away by the unrivalled menace of the supercars shape, one may even forget that deep inside lurks a beast every bit as savage as the bull himself. It’s powered by Lamborghini’s most powerful engine ever, a 6.5 liter 650 horsepower V12 work of art (not like the V10 engine found in the Gallardo which was based on Audi’s R8).

And although Audi now run Lamborghini, the Reventon has pure Lamborghini power whose origins can be traced back long before any Audi involvement. Maybe even to a time when the company was run by none other than Ferruccio Lamborghini himself. And what a fucking masterpiece they’ve created!