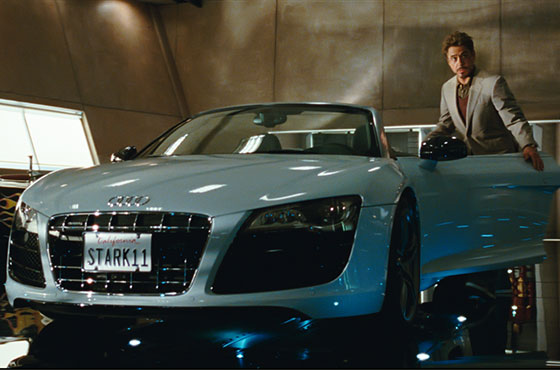 The James Dornan and Dakota Johnson starrer ’50 Shades of Grey’ has not only broken box-office records but also gave the Audi brand excellent publicity. According to Business Insider, the Audi R8 is the ride of choice of the film’s sexy billionaire Christian Grey. His taste in luxury supercars is also shared by another fictional billionaire by the name of Tony Stark. Stark, whose alter ego is Iron Man, was seen driving around in Audi automobiles in the three ‘Iron Man’ films.

‘50 Shades of Grey’ is a film adaptation of E.L. James’ novel by the same name. The Audi cars were also mentioned in the novel and later used in the film. The car makes several appearances in the film making for strong product placement.

Audi is cashing in on the product placement thanks to Hollywood’s graces. The sleek, powerful and sexy car appeals to the audience under 40 years old. It is perfect because a Rolls Royce would be too old for that audience and the Ferraris and Lamborghinis would be too sporty.

Business Insider states that “It only makes sense that Audi and Christian Grey are two passionate and aggressive tastes that go great together. It makes sense: Audi is aiming for a younger set of affluent buyers. Mercedes and BMW are for older folks; Audis are for young turks.”

Edmunds.com quoted Audi of America director of marketing Loren Angelo saying, “Audi is a brand that symbolizes performance, technology and modern design. The natural inclusion of our hottest models in this series illustrates how Audi has become truly synonymous with sophisticated luxury.”

Audi is looking to take over Hollywood. According to Carscoops, the ride of choice in the upcoming action flick ‘Hitman: Agent 47’ once again is Audi. The Audi RS7 is heavily featured in the film. You got one kickass silent assassin who takes out his targets in style and his sidekick is an Audi. The German automotive giant could very well be on its way to feature in a future James Bond film the way it is going!