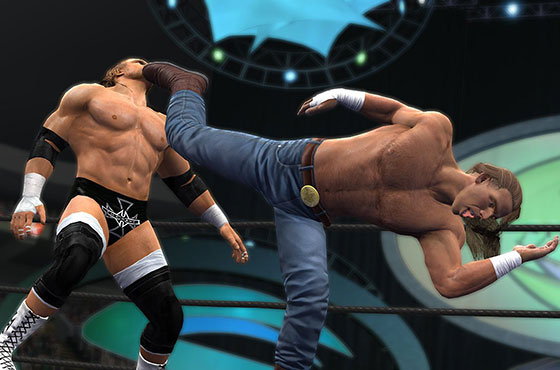 Being a long-time wrestling fan, I was super excited to play ‘WWE 2K15’ on the PlayStation 4. 2K Sports did a phenomenal job on ‘WWE 2K14’ with a stellar roster and excellent ’30 Years of WrestleMania’ mode. Unfortunately, I was so upset with the half-assed job done on the latest edition, considering it is the first from the franchise on the PS4. I list below five reasons why I feel it is the worst wrestling title I ever got a chance to play.

The controls include a lot of timed-button presses and chain-moves that are really hard to recall. Why can’t they keep things simple? While the stamina meter added a dose of realism, the turn-off was reversals and pinfalls. Reversals are simply timed button presses of the R2 button and kicking out of pinfalls is a game of chance. Nine out of ten times, you would be forced to restart the match because you were unable to kick out in time.

Legends like The Rock, Stone Cold Steve Austin, Bret ‘Hitman’ Hart, Ultimate Warrior and Hulk Hogan have all been included in the regular roster of titles prior to ‘Smackdown vs. Raw 2011’ but would be used as pre-order DLC since then. Despite the inclusion of Sting, Hogan is once again marketed as a pre-order DLC — a clear measure to cash in on the name of the former world champion. This time one can’t help but feel shortchanged.

Unlike previous titles, this time you only are allowed to get the ‘Showcase Season Pass’ which only gives access to the three extra Showcase modes (Path of the Warrior, One More Match and Hall of Pain), the Accelerator and exclusive Diva Paige for $25.  For the extra moves packs and wrestlers, you would need to pay extra. So much for a bargain!

One of the most exciting modes in the franchise was the wealth of customization modes. Gone are ‘Create-An-Arena’ and ‘Create-A-Storyline’ mode. The amount of created wrestlers has been decreased to 25 from 100 in ‘WWE 2K14’. The thing I miss most is the ability to play with created arenas and relive my favorite matches in their respective arenas. Ever since this was introduced in ‘WWE 13’, this became one of the best reasons to buy the title each year. Moving up to current-gen is clearly a step down.

Remember how easy it was to assign entrance music to your favorite created wrestlers or update the music for in-game superstars. Unfortunately, on the PS4 there is no option. This means, you have to make do with the music on the game or manually play the music on your stereo when your created superstar makes his entrance. This one’s a real bummer.

For all the so-called exciting new features and realistic graphics, ‘WWE 2K15’ has been wasted on the PS4. For those who want a real experience, better to play ‘WWE 2K14’ if you own a PS3. That is a much complete game.