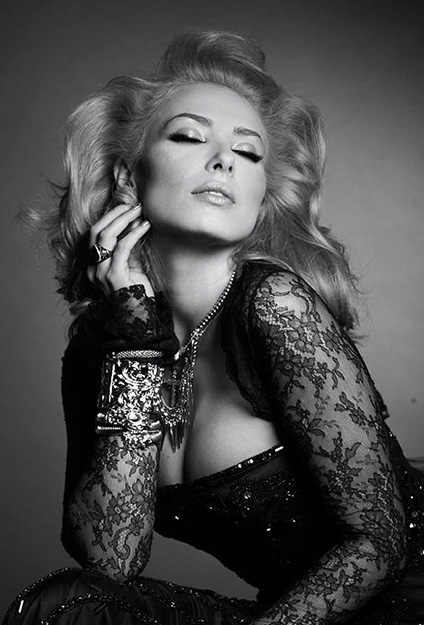 Last week’s ‘Khan-daan’ wedding saw Salman Khan’s baby sister Arpita Khan tie the knot with Delhi-based businessman Aayush Sharma. The fun filled affair hosted a number of noteworthy Bollywood celebrities. But more enthralling than the ostentatious occasion itself, was the appearance of Salman Khan’s sweetheart – 34-year-old Romanian beauty Iulia Vantur. The duo spent a lot of time together during the wedding ceremonies, and Salman even went to such lengths as to introduce Iulia to his family as his “Girlfriend”.

According to The Times of India, a source present at the wedding stated “Salman and Iulia were always together. There have been rumors linking him to Jacqueline Fernandez and Daisy Shah, but the fact is that Salman is in love with Iulia. She is very comfortable with his family too”. Currently, Iulia is hosted in a 5-star hotel in Mumbai, which is conveniently located close to Salman’s residence. It is also reported that he is covering her living expenses.

Apparently the newly-wed baby sister wasn’t too happy with her bhai’s closeness to the Romanian TV personality, whom she felt was using him as an express ticket to Bollywood. Iulia, who has made several appearances in dance shows abroad, did a special dance sequence alongside Pulkit Samrat – another star Salman helped launch in Bollywood. She also made an appearance in the item number song ‘Umbakkum’ for Atul Agnihotri’s ‘O Teri’.

Salman met Iulia in 2011 when he was shooting ‘Ek Tha Tiger’ in Dublin. She was then dating musician Marius Moga who helped Salman get the rights to a Romanian song which was adapted by Himesh Reshammiya as Teri meri in ‘Bodyguard’. The actress lives in Bucharest where she works as a television presenter as well as a model. Iulia has modeled for Salman’s very own ‘Being Human’ clothing line and promoted it through her own social networking sites.

During the India Today Conclave in March 2014, when rumors of his alleged relationship first surfaced, Salman said he was tired of being single for two-and-a-half years, stating “I am sighing more since it has been two-and-a-half years. It’s time to stop sighing because something soon will happen in my life”. Perhaps hinting at the possibility of getting hitched in the near future.

Salman has a history of dating fairer skinned beauties, which included Sangeeta Bijlani, Somy Ali, Aishwarya Rai (now Bachan) and Katrina Kaif. Will this pardesi be the last one? Now that his little sister is taken care of, is the Bigg Boss finally ready to take the plunge and settle down?