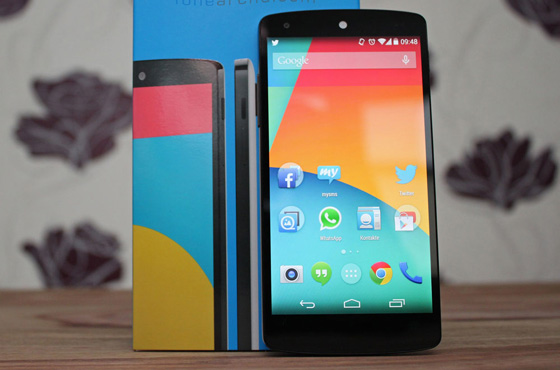 After the phenomenal success of their flagship model the Nexus 4, tech giant Google is proud to introduce to market its next generation Smartphone; the all-new Nexus 5.

Designed to provide users with the latest Android experience on Kitkat 4.4, and priced at a reasonable $350 the Nexus 5 boasts some rather impressive specs. It features a 5-inch, 1080p IPS Plus screen supported by Qualcomm’s quad-core 2.3 GHz Snapdragon 800 processor, 2 GB internal Ram and an 8-mega-pixel camera with image stabilization technology. Unlike its predecessor, the Nexus 5 fully supports 4G LTE which positions it neck and neck with current competitors the iPhone 5S, Samsung’s Galaxy S4 and the HTC One.

Google has never been flamboyant with the design of its products, and you can see the same minimalistic approach has been taken on the Nexus 5. It doesn’t make a bold flashy statement like Samsung’s Galaxy S4 or the iPhone 5S. The design is simple, but elegant. Available in your choice of black or white, it’s made to feel smaller than it looks due to its slightly-curved back and easy to grasp form. Weighing-in at just 130 grams and 8.6 millimetres thick, the Nexus 5 is a solid device that doesn’t compromise on build quality even at such a low price.

The Nexus 5 isn’t just fast; it is probably the fastest android device on the market right now. Qualcomm’s flagship processor complemented with 2GB Ram lets the phone smash-away everything you throw at it. Stock Android 4.4 (Kitkat) has made the android platform even more fluid than it previously was and when combined with such high-end hardware, the synchronization is just perfect.

When buying a Smartphone, the performance of the camera is something a lot of people pay attention to as for many it may be their favorite thing to do. So this review wouldn’t be complete without discussing the 8MP shooter featured on the Nexus 5. The camera on the Nexus 4 was not as impressive as other 8-mega-pixel cameras and Google received a considerable amount of flack for that. This time however, with the integration of image stabilization technology and certain software improvements the camera is able to capture images better than ever before. Though, in low-light situations it does seem to fall a little short. And while it may not be as impressive as the camera on the iPhone 5S, it’s certainly a step-up from the previous Nexus model.

The only thing about the Nexus 5 that seemed to bother me was the speaker. Though the clarity wasn’t horrible the speaker itself wasn’t loud enough to be on such a high-tech device. The grill that can be seen on the bottom of the phone is deceiving as it harbors both the speaker on one side and a microphone on the other.

At the end of the day however, $350 for a device which is future-proof (thanks to its hardware specifications) and bundled with the latest version of Android, the Nexus 5 is a steal for anyone looking for something that won’t burn a hole in your pocket but still provide you with absolutely world-class functionality!