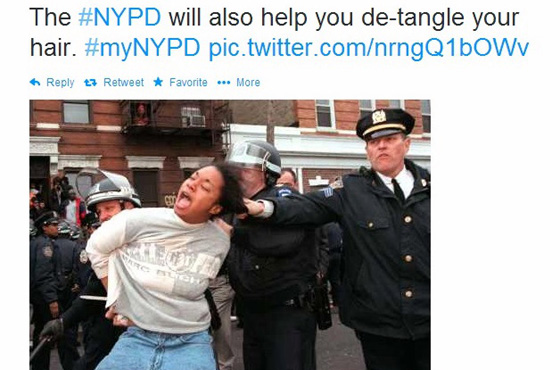 New York police were eating extra helpings of humble pie after asking people to post images of themselves and NYPD officers on Twitter — only to face a deluge of pictures of alleged police brutality.

“Do you have a photo w/ a member of the NYPD? Tweet us & tag it #myNYPD. It may be featured on our Facebook,” the department posted on its NYPD news Twitter feed, hoping to fuel a feel-good, low-cost public relations campaign.

The result was anything but.

Images and tweets of many arrests of demonstrators went viral, including such presumed lowlights as an officer pulling the hair of a handcuffed young black woman and another of the bloodied face of an 84-year-old stopped for jaywalking.

One image showing police after striking a protestor brought the remark “Here the #NYPD engages with its community members, changing hearts and minds one baton at a time.”

The NYPD so far has yet to post any happy shots on its Facebook page from its request for public submissions.