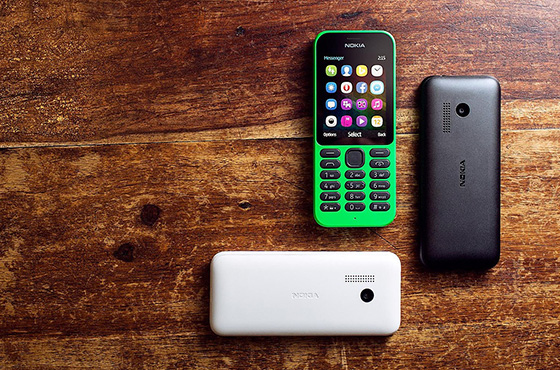 That’s right guys, Microsoft just announced its latest handset: the ‘Nokia 215’, which comes packed with a battery that can last for up to a month between charges! (or so they claim…)

It may not be the smartest phone on the market, but with a price tag of just $29, it makes for the perfect second phone. According to The Independent, Microsoft announced the phone as it’s “most affordable internet-ready entry-level phone yet”, saying that it would be “perfectly suited for first-time mobile phone buyers or as a secondary phone for just about anyone”.

While the number of apps available are limited, the ‘Nokia 215’ comes preloaded with social media monoliths Facebook and Twitter. It features instant notifications, so you’ll never miss out on the latest from your friend’s feeds. Surfing the internet on this pseudo-primitive handset is also a breeze, courtesy of the included Opera Mini Browser and Bing Search.

Although the built-in apps are designed to work without high-speed data, one major thing the device lacks is a 3G connection. But let’s not forget that it’s mainly a low-spec handset. The 215’s headline features include a 320 by 240 pixel display, a 0.3 mega-pixel camera, a radio feature as well as a handy torch option.

Considering that the handset was designed with a specific market in mind, the lack of fancy features makes it a durable, robust phone, perfect for buyers in the budget market. Microsoft claims its battery can last up to 29 days on standby, can provide provides up to 20 hours of talk time, and with its built-in MP3 player and FM radio app, the Nokia 215 can keep you entertained for up to 50 or 45 hours of playback respectively.

The torch addition might seem a bit trivial, but Microsoft points out that it will be useful in the markets that it hopes to tap into; namely, 20% of the world that doesn’t have access to regular electricity. The phone is set to be released in Europe, Middle East, Africa and Asia in the first quarter of 2015, and will be available in single as well as a dual SIM models. So far, it is uncertain whether the handset will be made available in the United States.