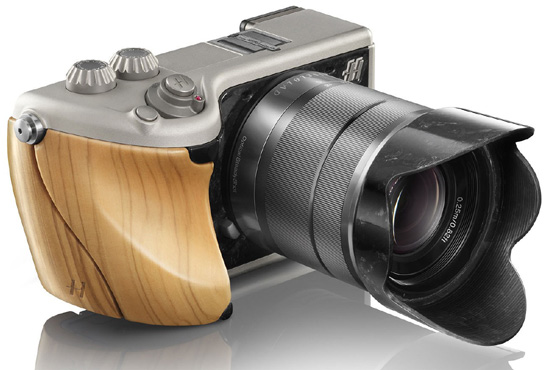 Sony’s DSC-RX100 is without a doubt a great camera. But its “ordinary” looks and dull-black body don’t make it the sexiest gadget to carry around. That’s where the Hasselblad Stellar comes in. Hasselblad, the Swedish luxury camera manufacturer has produced a “luxury” compact digital camera based on the Sony Cyber-shot DSC-RX100.

The Stellar’s attractive exterior makes it a nice substitute to Sony’s flagship model and arguably one of the best compact camera’s in the market today. Styled with a custom grip, a brown leather wrist strap and matte gold in color, the Stellar is pure eye candy. The grip is available in a number of different finishes including carbon fibre or six different kinds of exotic wood including Wenge, Padouk and Zebra. Conveniently small and portable, the stunning 20.2 megapixel camera features a Carl Zeiss Vario-Sonnar lens and shoots in both RAW and JPEG format. It can also record videos at up-to 60 frames-per-second.

Priced at three times more than its Japanese counterpart, the Stellar is no small purchase with an eye-watering sticker price of $1960. But the Swedish company is known for taking risks. Hasselblad previously introduced the ‘Lunar’, also a mirrorless interchangeable-lens camera based on Sony’s NEX-7. With its artistic makeover and glossy upgrades, the Lunar sold very-well especially considering it was priced at nearly five times higher than the model upon which it was based.

Targeted at luxury buyers whether or not the Hasselblad Stellar proves a suitable alternative to its Japanese counterpart has yet-to-be seen. But for the image and style conscious – It is simply a must have item!