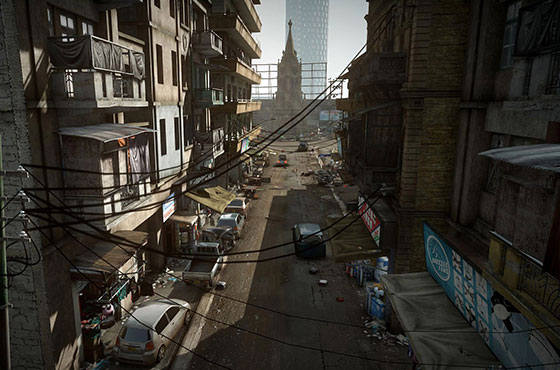 Karachi: The Perfect Setting for a New Grand Theft Auto

Rockstar Games have introduced an incredible sandbox open-world in their ‘Grand Theft Auto’ series. Every protagonist including Niko Bellic from ‘Grand Theft Auto IV’, Tommy Vercetti from ‘GTA Vice City’ and the trio of Michael, Franklin and Trevor from ‘GTA V’ all have amazing stories that are built around their virtual worlds.

These virtual worlds are based on real life cities. For example, Liberty City was the first and has been used more than once but the best version was in ‘GTA IV’- a carbon copy of New York City.  However, there is one city that is yet to be featured in a GTA title. And that, my friends, is none other than Karachi, the city of lights!

If the series ever moved out of the US, then Pakistan’s business capital Karachi would provide the perfect backdrop for an entirely new GTA adventure. It is no different than LA and New York when it comes to social divides, nightlife, crime, corruption and everything else that you would dive into when playing a GTA game. For those who don’t know, Karachi was featured in ‘Call of Duty: Modern Warfare 2’ as a multiplayer map and in a playable mission in ‘Medal of Honor Warfighter’. The latter featured landmarks such as Empress Market, Port Qasim and Kaemari.

Karachi has everything from tall buildings to flyovers, shopping malls and all kinds of vehicles. There are buses and rickshaws for public transport. Just imagine stealing a rickshaw while on the run from the local cops. In fact, one could easily provide the cops with ‘chai paani’ (tea and water) to get them off your back. You could also hitch a ride on top of the colored and painted buses.

Missions could involve political parties such as MQM or phone snatchers riding on bikes. The protagonist could be a street kid trying to go up the social and financial ladder by working in tandem with local law enforcement and the underworld crime bosses. One would have to deal with power outages, traffic, mugging and inflation- the things Karachiites worry about.

There would be a morality system in place where each action would have a different reaction. If you play nice by stopping street crime, you get rewarded with appreciation from the public. On the other hand, if you involve yourself in street crime and breaking laws, your notoriety would increase and be known as a public nuisance. Levels of law enforcement will vary. If you start creating real havoc, then the army rangers will be called and these dudes take no bullsh*t. They can’t be bribed because they are part of the armed forces.

There is a real rags to riches story that be set in the backdrop of one the world’s largest cities. A population of over 18 million citizens, you would be exposed to various languages as well including Urdu, Sindhi and Punjabi. You would see the social divide with the ‘burger’ kids living the high life owning expensive phones, cars and hanging out in upscale joints, shopping malls and Zamzama street. Then we would even have Lyari on the ‘other side of the bridge’ that shows the less developed and slums of the city.

Hopefully GTA series could do justice to Karachi and show the real side. ‘Medal of Honor Warfighter’ got very close and perhaps is the best depiction of the city in any video game. Knowing Rockstar, they would turn up the volume and really up the ante and we can have a gritty crime story in a living, breathing virtual Karachi.