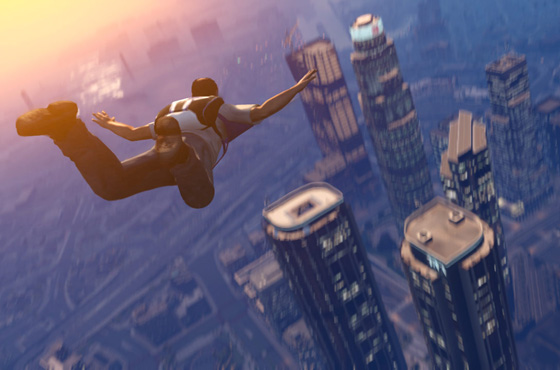 The wait for Grand Theft Auto V was a long one but it’s finally here. It’s been roughly five years since the last GTA but what some people failed to mention was that Rockstar had been quite busy in those five years, refining their narrative storytelling techniques, graphics and game mechanics. They released Red Dead Redemption, L.A. Noire, Max Payne 3 and Midnight Club: Los Angeles to name a few.

Everything from driving to shooting feels a lot smoother in Grand Theft Auto V. If you just want to run around killing people, you can do it. The only problem is that you’ll be broke, dead and completely miss the well written and brilliantly voice acted game in front of you. It’s almost as if the guys at Rockstar watched all of Michael Mann’s movies back to front and then developed the game. Notable films by Mr. Mann include: Thief, Manhunter, Heat, Collateral and Miami Vice. The game feels more like a thriller during the new heist sequences.

With the new game comes three, not one, character. Franklin is a young brother born and raised in Los Santos. He’s tired of all the bullshit in his hood: the gang banging, carjacking and turf wars. He wants something bigger in his life. His speciality is driving. He possesses the ability to slow down time whilst driving to maneuver in-between traffic and take sharp turns.

Michael is a middle-aged, retired con who spends his time having arguments with every single member of his family. He used to rob-banks and is now sitting comfortably in his mansion overlooking downtown Los Santos. Yet he is unhappy. Waiting for something to happen to him, while he wallows in mediocrity. Michael specializes in bullet time. Like Mr. Max Payne, Mike can slow down time while shooting. This allows him to perform some magnificent headshots and gives you some breathing room when you feel overwhelmed under a hail of bullets.

Trevor is the unstable out of our three anti-heroes. A bald, repulsive yet highly-amusing testosterone filled maniac. He may or may not be Canadian but that’s for you to discover. He lives in a trailer in Blaine County and conducts a healthy methamphetamine business, which occasionally, sorry, continually erupts into glorious violence. Speaking of violence, Trevor’s speciality is best described as carnage. When activated he flies into a fit of rage and is able to take a massive amount of damage. His bullets also pack an extra punch.

The new gameplay mechanic of switching between characters is seamless. Don’t worry if you think you are missing out on some action by not continually switching characters, because you’re not. Your characters are out and about doing their own thing. Be it chilling with their family, doing pull ups on muscle beach or waking up next to a pile of dead bodies proclaiming something like: “Last man standing! Again.” During missions is when the character switching really shines. One minute you’re flying a helicopter, the next you’re rappelling down a building or taking headshots with a sniper rifle.

For a game that is so engulfed in graphic and verbal violence it was hard for me to feel offended or disturbed. A sturdy dosage of watching action films and listening to hip-hop from a young age had prepared me well for the twenty first century. However, a few critics have described our three anti-heroes as “vile” and the story as “disturbing”. I only felt uncomfortable with the level of violence during one mission but at the same time I was applauding Rockstar for its audacity. The anti-heroes of GTA have no morals, apart from honour among thieves. But even that old adage is tested. Michael does everything for his family, even if it means screwing over his best friends. Trevor is just a maniac and Franklin just wants to make it out of the hood. These men are just taking advantage of the opportunities presented to them, which are grand larceny, grand theft auto and murder. The whole game is about money. Getting as much money as possible.

You can make a lot of money in Grand Theft Auto V. The most obvious way to get money is by performing missions for various people in the game. The other obvious way, with the big payouts, is to perform heists. The heists were the most thrilling part of the game for me. You have to set up the whole heist yourself by scoping out the joint, stealing vehicles, clothes or knockout gas, parking a getaway car at a suitable location and picking your own crew.  You are usually given two options when performing a heist, one, which is loud, and the other, which is subtle. Even after you complete the game you can go back and replay these missions to try and achieve a gold medal. The third way you can make money in the game is by playing the stock markets. You can literally make a billion dollars by the end of the game if you invest in the right companies and sell at the right time. One word of advice, don’t do all the Lester missions in one go. I did, so now I have to play the game again so I can become a legitimate billionaire!

Who is safe from ridicule and satire in GTA V? Absolutely no one. Liberals, Republicans, hippies, vegans, G-men, police, gang-bangers, movie stars, studio execs, teenagers, the video gaming industry, social media and humanity. Did I miss anyone out? I’m sure I did. If Grand Theft auto IV presented the absurdity of ‘the American Dream’ then GTA V is mockery of the American reality.

You even own a Smartphone, which you can use to take photos, including ‘selfies’. The phone also lets you browse the internet to buy cars, planes, helicopters, boats and even trade on the stock market. There is even a version of Facebook called LifeInvader that allows you to stalk companies and people, allowing you to get discounts within the game.

There are so many other activities to undertake in Los Santos. Its a million games in one! You can play tennis or golf, go racing or hunting, customize your ride, take part in a triathlon or even go skydiving. All these ‘mini games’ feel and play like stand alone titles. The tennis can be compared to Topspin and the golf to PGA. I wound up having a game of tennis with my in-game wife Amanda for about an hour and then took part in what seemed like an endless cross-country triathlon. My thumbs were exhausted!

If you just feel like going for a drive along the coast in GTA then you can n some incredibly fast cars that handle very well. You can steal cars or you can buy them and park them in one of your garages in Los Santos or in your driveway. Each character gets their own unique garage where you can park stolen cars alongside cars you spent your hard-earned money on. Furthermore the cars can be fully customized at Los Santos Customs. This includes everything from body kits to transmissions and man, are these cars rockets when you’re done with them!

The real star of the game is the city of Los Santos. There is so much going on its unbelievable. The other night I took a tour of Vinewood, the same you get in Hollywood where you drive past famous landmarks, celebrity hot spots and mansions.  The fun doesn’t stop in the city however. The surrounding countryside, Blaine County is full of wild animals, a wind farm, rolling hills, mountains, a cable car ride and strange illuminati graffiti. The newest addition to the GTA world is the ability to go diving and explore the Pacific Ocean. There are shipwrecks and plane wrecks to explore. There is also a crashed spaceship in the ocean, sharks to be eaten by and ‘treasures’ to be discovered.

It’s been a long five years but Grand Theft Auto V does not disappoint. The writing is sharp, funny, and satirical yet thought-provoking. The action and story do not feel rushed as planning your missions correctly mean you pulling off incredibly slick heists. There are moments during the game that will take your breath away. Steal a helicopter and fly towards the Vinewood sign and then turn around to admire the skyline. The city is alive and bustling with all sorts of adventures for you to pursue – big and small and before you realize it, it’s four in the morning, your girlfriends left you and taken the car!