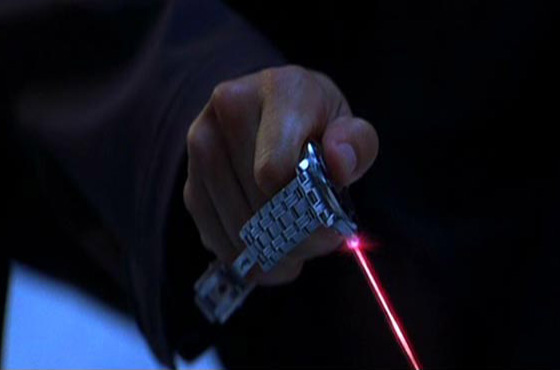 Remember how Michael Knight shot a laser from his com-link watch in the classic TV show ‘Knight Rider’? Or how James Bond’s Omega Seamaster wristwatch helped him cut through armoured panels in ‘Goldeneye’. Well inventor Patrick Priebe sure did! The German tinkerer has created a watch armed with an actual laser.

The Inventor, who attached a laser module to a digital timepiece, states his device can pop balloons, light up matches, burn holes in CD-cases, as well as cut through tape in mere seconds.

The watch’s battery has ten minutes of juice, and shoots a beam that outputs 1,500 milliwatts (mW) of power, which can burn the wearer if he is not careful. For comparisons sake, US FDA Code of Federal Regulations stipulates that ‘demonstration laser products’, such as pointers, must operate under a maximum of 500 mW, with common presentation pointers averaging under 1 mW of power.

According to CNN, Priebe, who runs a firm called Laser Gadgets, made the watch out of ‘leftovers’ stating “I found a piece of leftover tubing, and I put it on my wrist and I realized it looked like a watch already,” he said from his home near Cologne. After molding the tubing a bit more, “all I had to do was file down the edges to make the time module fit and cut something out for the laser module on the side, and it fit right away. It’s just my style, putting things together without a plan”.

Although it has been compared to 007’s handy accessory, Priebe claims it wasn’t inspired by a particular Bond film. Instead, it was adapted from the legendary Nintendo 64 title “GoldenEye” – the video game based on the 1995 Pierce Brosnan Bond movie – in which players could use a ‘laser watch’ to singe opponents. The watch took 40 hours to construct and cost approximately $300 to build.

This is one feature latest smart watches such as ‘Apple Watch’ and ‘Moto 360’ will surely be lacking. But sadly you’ll be disappointed if you’re interested in adding this beauty to your collection, as the watch is one-of-a-kind novelty and absolutely not for sale. Priebe concludes “There are some limits, I always say I don’t make weapons. I just make toys”.