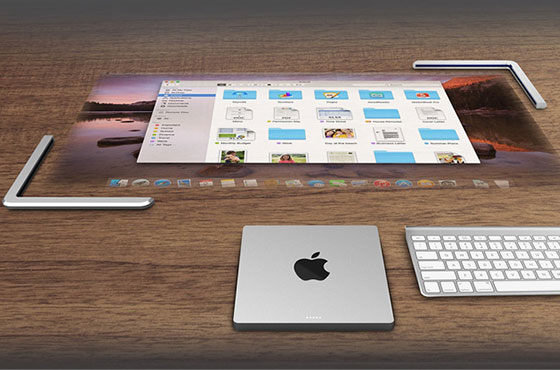 Apple Lightmac: The Future is Wow

Since Mac became cool in the new millennium, Apple Computer seems to have dictated the future of technology. They could be on the verge of another milestone. Imagine a screen-less tablet that can also become a desktop? All this is possible in the concept Apple lightmac. According to Stuff.tv, it “combines the power of desktop with a projected touchscreen.”

This futuristic marvel is a creation of industrial designer Tomas Moyano who has aimed to make a virtual hybrid desktop-tablet. It comes with two brackets that would form the frame of the touchscreen and an Apple TV like digital box that contains all the bells and whistles as well as a wireless keyboard. The display is projected to a virtual screen that fits within the brackets.

The brackets can be resized to your liking. Considering this is what would be considered state-of-the-art in the future, what lies under the hood? The CPU is made up of a core i9 processor with 16 GB ram and has 24-hour battery life. A wireless keyboard can be attached via Bluetooth 6.0. The extra peripherals give about 12 hours of battery life.

When we mean future tech, this is about 10 years from now. So in 2025, we could see the lightmac make its debut and take the world by storm. It seems that one day we may not have physical screens to watch television or computing. However, the technology is still very new and ten years is still a long way away for us to make predictions.