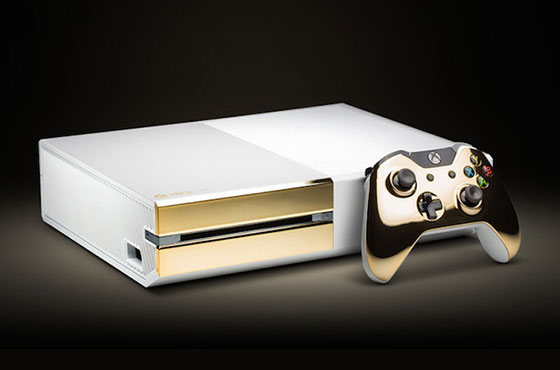 $1200 For This Blinged Out Xbox One From Colorware

If you thought your game console had less bling, then you should consider investing in Colorware’s customized Xbox One. According to High Snobiety, Colorware has released a limited edition Pearl finish Xbox One with gold accents. Under the hood, it packs the same punch as a regular Xbox One but it looks great in your living room.

Microsoft’s Xbox One was designed to be an all-in-one entertainment system giving you control over games, films, music and television. The added bling will make the console fit nicely with the rest of your furniture. The accents on the console are all in 24 karat gold. According to the official website, “the top and bottom drive panel of the console have been gilded with a rich, 24k Gold treatment.” Even the controller gets some added shine in 24k gold.

Only 50 of these monsters are available for $1199. The question most gamers will ask if its worth spending over $1000 on a game console. The Xbox One is a fine gaming console and has some excellent games. One can get a regular edition for $399 without the Kinect add-on. We wonder if Colorware would ever release a Pearl Xbox One with gold accented Kinect peripheral. Regardless, Colorware’s console does not offer much other than aesthetic value.

In terms of the console wars, the Xbox One is in second place to Sony’s PlayStation 4 that recorded official sales figures of 20.2 million units sold early this year. Both Xbox One and PS4 launched in November 2013 but it was the latter that had phenomenal success.

Colorware have customized the PS4 but it’s not in Pearl or features gold accents. Instead it features dramatic racing stripes with a blue and white finish on both the console and controller. That retails for $899 and will ship in a couple of weeks. If a choice had to be made, we would rather go for the PS4 because it’s less expensive and has some incredible games released this year including the highly successful exclusive ‘Bloodborne’.