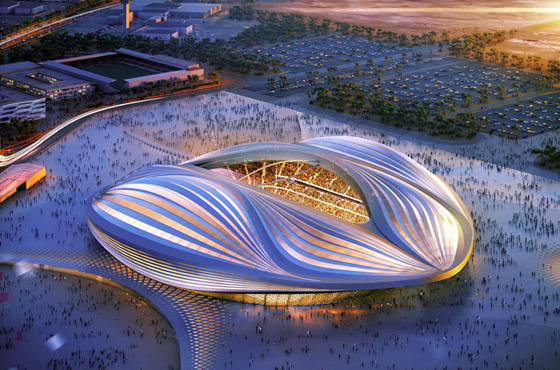 Though the FIFA World Cup in Qatar is nearly a decade away, the design for the first stadium; the Al Wakrah was unveiled by British-Iraqi architect and feminist icon Zaha Hadid.

Within a few hours of it being revealed, the design for the new state-of-the-art facility went viral with many users in the social media sphere likening the design to a woman’s private parts – something that was almost certainly unintentional.

Climate-controlled and topped with a structure resembling the sails of a dhow, the design is meant to tackle Qatar’s searing heat. But to those who have no idea what a dhow looks like, the Al Wakrah stadium looks like a giant vagina.

Zaha Hadid has said she finds the comments comparing her plans to female genitalia ‘really embarrassing’. The Iraqi-born talent and arguably the world’s best female architect also suggested the plans would not have faced the same criticism if they were designed by a man.

“It’s really embarrassing that they come up with nonsense like this,” Hadid said in a recent interview. “What are they saying? Everything with a hole in it is a vagina? That’s ridiculous.” Hadid, who won the prestigious Pritzker Architecture Prize in 2004, added that “if a guy had done this project there wouldn’t have been the same level of criticism”.

The unintended sexual imagery of Al Wakrah Stadium must surely be an embarrassment for the government of Qatar, an Islamic state that enforces Sharia law.

During the FIFA World Cup the Al Wakrah Stadium will accommodate 40,000 spectators, but this will be reduced to 20,000 once the competition is over. Leftover seats will then be removed and shipped to developing countries. The construction of this stadium is set to begin sometime in 2014.