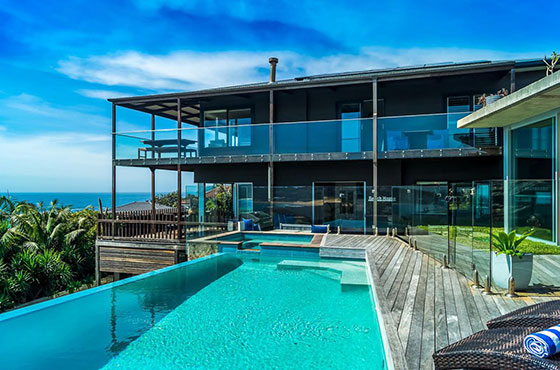 Five Football Star Homes That Will Blow You Away

The world’s greatest footballers are known to work hard and play hard. They also enjoy an extravagant lifestyle considering their wealth. After a day’s training and 90 minutes on the pitch, these men relax in their lavish mansions. Here are five footballers, according to TheRichest, with some of the coolest pads on the planet!

Kaka/ Gareth Bale
Former Real Madrid star Kaka lived in style when playing for the Los Blancos. His pad in Madrid is valued at $3 million which the Santos player purchased back in 2009. This luxury house features everything from a gym, indoor pool and even a garage with space for six cars. According to 90min, this crib is the dwelling place for Gareth Bale who moved from Tottenham Hotspur to Madrid in summer of 2013 and pays $16000 monthly for rent.

Andres Iniesta
Iniesta is one of Barcelona’s biggest stars and alongside Lionel Messi and Xavi, the Catalans were indestructible for years. As big as he is on the pitch, he likes to live it large in Barcelona. His $4.6 million pad even bears his name outside telling everyone that this is crib! It was built in 2005 and consists of five bedrooms, a pool as well as a chapel.

Cristiano Ronaldo
In 2014, Cristiano Ronaldo was at his best. He beat Lionel Messi for the Ballon d’Or prize and also helped Real Madrid win their 10th UEFA Champions League. However, we feel his biggest asset is his mansion in the Spanish capital. Valued at $6 million, it is a home fit for the ‘fittest man alive’. This luxury mansion has a sauna, private theater, gym and even an aquarium.

Frank Lampard
Frank Lampard is one of the best players to wear the white strip for England. He is also a Chelsea legend who now plays on loan for Manchester City from New York City FC. His $7 mansion in Surrey covers a staggering 19,500 square feet. The luxury home is reportedly one of the two owned by the midfielder when he played for the Blues. This awesome mansion boasts nine bedrooms, twelve bathrooms, a putting green for golf, a swimming pool, a tennis court and a boat dock. How much more lavish can this get?

Wayne Rooney
The England and Manchester United skipper is the highest paid player in the Barclays Premier League. No surprise his home is valued approximately $17.83 million. This was constructed in 2004 in Cheshire, England and comes complete with pool, private theater, Grecian statues and undersoil lawn heating. This is certainly incredible when compared to the home of former United teammate Cristiano Ronaldo. Now all he needs to do is win a Ballon d’Or so he can proudly show it off in his mansion!