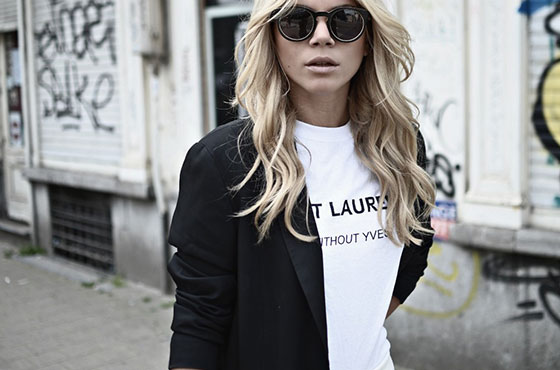 Saint Laurent’s Hedi Slimane isn’t too happy with people who want the Yves back in Saint Lauren. According to Fashionista, a company by the name of What About Yves founded by Jeanine Hellier is facing a lawsut from YSL parent company Luxury Goods International.

Hellier’s company designed shirts with ‘Aint Laurent without Yves’ printed on them and was sold by major retailors including Colette and Kitsune. She reportedly attempted to trademark ‘Aint Laurent Without Yves’ in 2013 but failed due to it being similar to the one in ownership of LGI. The lawsuit claims that Hellier’s shirts violate “trademark infringement, trademark dilution, false designation of origin and unfair competition.”

According to LGI, “the defendant’s infringing conduct is onging” meaning Hellier is still putting the shirts on sale. LGI sent letters to Hellier but no response came from them as the shirts kept getting sold. It was around early 2014 when she rejected claims of wrongdoing and even offered LGI her brand ‘Aint Laurent Without Yves’?

Even though the lawsuit claims that Hellier’s merchandise is not of the same quality, it could possibly confuse their customers. Even though Hellier may not have intended any harm, LGI has the rights to protect their trademarks and intellectual property. This is not the first time, such things have happened. The ‘Cuntier’ brand came under legal threat from luxury brand Cartier for example.