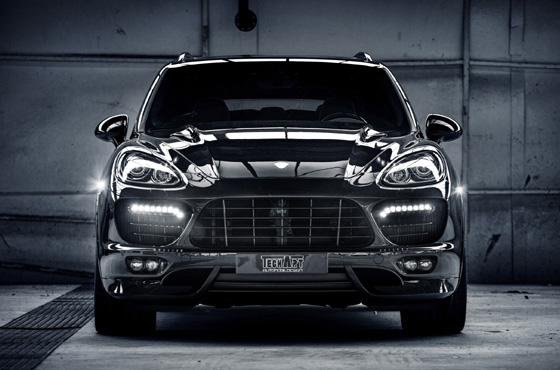 The Cayenne Diesel is reported to be the best performing ‘non-turbo’ in the Cayenne range. While it is faster than the S edition it is still marginally slower than the Turbo edition with an optimum speed of 261 km/h. Still, the ‘family car’ boasts an impressive track time of 0-95 km/h in 5 seconds flat. Powered by a beastly 4.8 liter, V8 engine the luxury SUV packs a powerful 420 hp and comes fully-equipped with an 8-speed automatic transmission

The Cayenne Diesel looks remarkably similar to the Cayenne Turbo, except it’s a lot more curvaceous. It sits 24mm lower than the Cayenne S and is reminiscent of a tiger crouched in the bushes, ready to ambush its prey. Moreover, the Diesel edition comes standard with high-gloss black window frames, a double-wing roof spoiler, broad fenders, bi-Xenon headlights and a sports exhaust with black exhaust tips.

Its plush interior comprises of leather racing seats with a faux suede trim. Bluetooth-ready, the latest model features a Bose surround sound system that can be connected to your iPod with an in-built iPod dock. Optional upgrades include navigation, a sunroof, a heated windshield and a host of different wheel, paint and upholstery options.

The Diesel is expected to hit showrooms sometime later this month. For the first time ever, a Cayenne offers Porsche’s Sport Chrono package. That means the Cayenne Diesel has much sportier handling features making the latest edition significantly more agile than its predecessors.