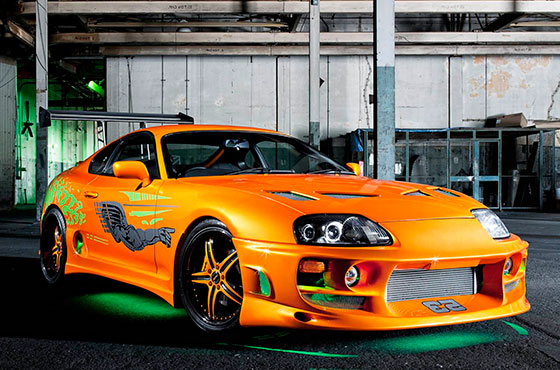 Own it! Paul Walker’s Supra From the First Furious Movie

If you started crying after watching the emotionally-charged final scene in ‘Furious 7’ and missed Paul Walker, then you have a chance to honor his memory by purchasing his character’s car from ‘The Fast and the Furious’.

According to High Snobiety, Bryan O’Connor’s modified Toyota Supra featuring in the first film of the blockbuster franchise is available for sale. O’Connor raced in this car against Vin Diesel’s Dominic Toretto in the final scene. The car was reportedly modified by Eddie Paul of The Shark Shop in El Segundo, California. Several versions of this car were used in filming, but the one available will cost you between $150,000 USD to $200,000. Under the hood, we have a 3.0 liter engine that outputs around 220 horsepower. The rear compartment has two mounted nitrous oxide bottles. It also comes fitted with Dazz alloy wheels, Bomex body kit and an APR wing.

It is a beautiful car and you can emulate the late great Paul Walker by getting behind the wheel. According to Entertainment Weekly, the modified 1993 Toyota Supra will be auctioned off at the Mecum Auctions Indy 2015 event held from May 12 to 17 in Indianapolis, Indiana.

‘The Fast and Furious’ franchise introduced the world of underground racing in mainstream cinema. Walker became synonymous with the franchise alongside co-star Diesel. Walker has made appearances in all the films except for ‘Fast and Furious: Tokyo Drift’. According to the BBC, ‘Furious 7’ is the fastest film to gross a billion dollars globally. It is the most successful film in the franchise and introduced two new characters Ian Shaw and Mr. Nobody played by Jason Statham and Kurt Russell respectively.