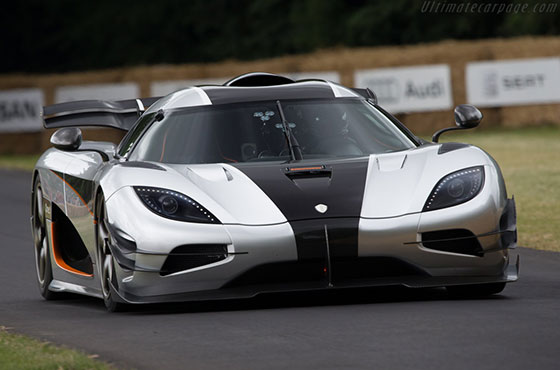 Koenigsegg One: 1 to Set New Record

Koenigsegg One: 1 is an impressive beast. This hypercar is one of its kind. It boasts weight to power ratio of 1:1. According to Car and Driver, it outputs 1341 horsepower and weighs 1360 kg.

This super-charged ride is set to establish a new record. According to BBC Top Gear, the car is hoping to achieve a new lap record at the Nurburgring in spring of next year. Koenigsegg founder Christian von Koenigsegg was quoted saying, “Given the straight-line performance of our cars. Many people believe they are straight-line rockets. Actually, this is the least of our priorities and focuses. The massive engine power [of the One:1] is nice to have, but far less important than mechanical grip around most tracks.”

He also added that the ‘well shorted chassis’ “allows for a very small track width deviation during wheel movements, in combination with one of the highest downforce numbers ever achieved on a road-going vehicle.” So, according to BBC Top Gear, the secret is on the chassis and not in the enormous 1340 bhp. One of the world’s most respected authorities in motoring reports that the “One:1 boasts huge power from its twin-turbocharged 5.0-litre V8, will go from 0-62mph in 2.8 seconds and top out at a theoretical 273mph, it boasts 600kg of downforce from that Le Mans-inspired rear wing, and a cornering force of 2G.”

Christian further stated, “During our testing [at the Nürburgring], which so far has been for data collection and setup, we can already see the potential when comparing official data and videos from other manufacturers”. The Koenigsegg CCX had been one of the previous Top Gear Power lap record holders and is still in the top ten. Could the One: 1 be the new number one on this esteemed leaderboard? We will not be surprised!

The $8000 Smartphone for Pocket Billionaires