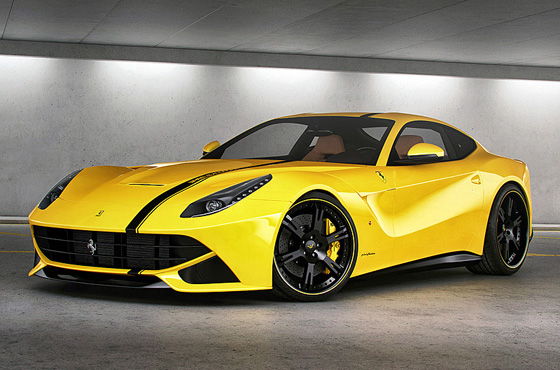 First unveiled to great awe at the Geneva Motor Show in February of this year, it came as no surprise when Ferrari’s F12 Berlinetta bagged the prestigious Auto Bild Design Award.

The magnificent beast has a dramatic curve pressed into the car’s side that makes it look like a lean, mean racing machine. LEDs line its sleek headlights which are streamlined neatly into the body. Standing at 15 feet long, 6 feet wide and 4 feet low, the Italian stallion sits comfortably close to the ground and weighs a meager 1500 Kg.

Nicola Boari, Marketing Director at Ferrari reported that the F12 can stretch its speedometer to an insane 340 km/h. It shoots from 0 to 62 mph in 3.1 seconds flat, which makes it 0.6 seconds quicker than the Ferrari 599 GTB Fiorano it replaces. That’s not all. Equipped with a dual clutch 7-speed transmission, the 6.3 liter V12 engine packs a fierce 729 hp. Though it’s not the most silent ride, for petrol-heads and race car enthusiasts the roar of the engine is like music to the ears.

Its interior is neatly arranged. The F1-style steering wheel is fit to display in an art museum, combining the responsiveness of a race car with the sophistication of a luxury one. To the right sit all the gadgets including a TFT infotainment screen, satellite navigation, stereo with Bluetooth streaming and voice-activated audio controls. Even though it’s relatively compact, the sportscar even offers you space to store your luggage once the rear seats are folded.

According to Italian media sources the F12 Berlinetta is the most powerful production car in the history of the ‘prancing horse’. And with a sticker price of $330,000 it’s not cheap. But to Ferrari’s credit, they do find a way to give back. The Italian luxury sportscar manufacturer managed to raise $1.5 million for Hurricane Sandy victims at an auction in Austin, Texas for the first F12 ever put on the market. Funds of which will go to the American Red Cross.