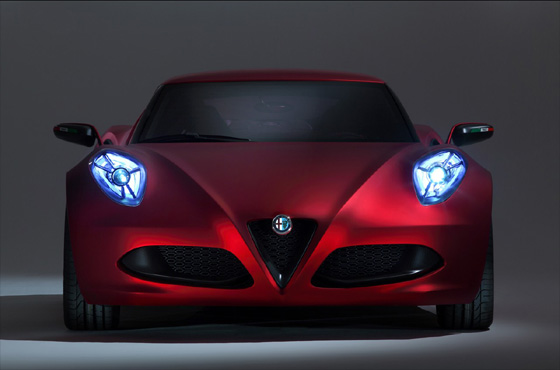 Alfa Romeo pulled the veil off its latest creation, the 4C, during the 2013 Geneva Motor Show. It is hoped the launch of the 4C will boost the brand’s slump in sales. The 4C not only marks a new way forward for the ailing Italian automobile manufacturer but also entry in two huge global markets, mainly China and the US.

The name 4C follows in the lineage of two infamous Alfa’s from the 1930’s and 1940’s – most notably the 6C and the 8C. Both revolutionized engine technology at the time powered by beastly six and eight cylinder engines respectively. Alfa Romeo hopes the 4C will have a similar effect on the industry.

The 4C is powered by an engine Alfa calls the ‘1750 Turbo Petrol’. The all-aluminum four cylinder engine features direct injection and a revolutionary ‘scavenging’ control system that eliminates turbo lag. Alfa engineers have mounted the engine mid-car and have sent the power to the rear wheels, making the coupé a mid-engine, rear wheel drive like many of today’s supercars. Bolted to the four-cylinders is a ‘TCT’ twin-dry clutch transmission, and drivers shift the transmission with two F1-style paddle shifters mounted behind the steering wheel.

With what Alfa calls its ‘Alfa DNA Selector’, drivers can choose from four driving modes: Dynamic, Neutral, Weather and Race. And though the agile two-seater was designed primarily by Alfa Romeo, Maserati’s engineering team also had a hand in the design. So much so, that the 4C will be built in Maserati’s assembly plant in Modena, Italy.

The 4C is expected to cost at around US$60,000 putting it in the same league as the Porsche Cayman and Nissan Skyline GT-R. Weighing in less than a ton and powered by 237hp engine, we can’t wait to see if the 4C lives up to the hype.