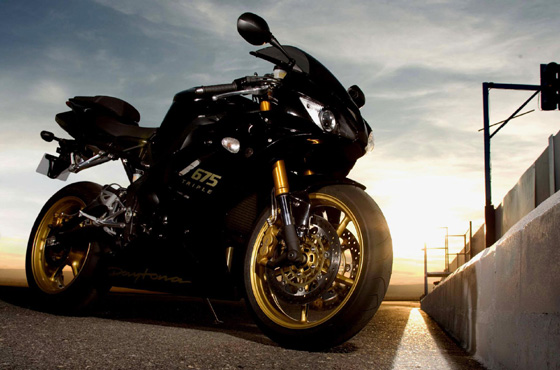 First established in 1902 and now based in Leicestershire, UK, Triumph is amongst the fastest growing motorcycle brands in the world. Having produced motorcycles for well over a hundred years now, the brand has only recently come into the limelight after appearances in several Hollywood blockbusters including: The Matrix, Johnny English and the Mission: Impossible series.

With over 50,000 motorcycles produced every year Triumph has grown to become the biggest automotive manufacturer in Britain.

This year will see the debut of two new Rocket III flavors: the ‘Roadster’ and the ‘Touring’. The Roadster is a fly-free style beast, as the torque limiter for the first three gears has been removed allowing for the rider to really blast off. To add to the bike’s mean exterior the Roadster loses the chrome, replacing it all with matte black for a truly monstrous look. The Touring edition on the other hand is for the ‘nature enthusiasts’ who enjoy going for a ride and seeing every inch of a country. Its decreased torque and tuned suspension help deliver an unforgettable experience.

Spirited both in design and performance the new models are expected to hit markets sometime later this year.