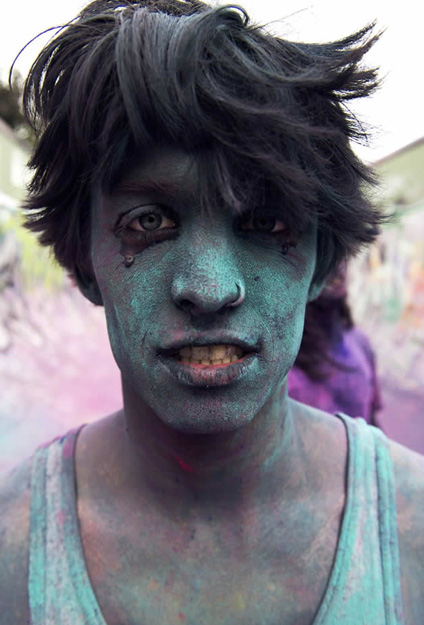 The playful and carefree Kate BellM

From the tender age of 14, Kate Bellm used to ‘style’ and ‘makeover’ friends and tell them to pose as models in her photoshoots. Just five years later, her big break came in the form of an editorial offer from men’s style bible Esquire to shoot ‘Harley Bike Week’.

Now 27, she is the photo editor of Lurve magazine in Berlin, but her arresting and chic editorials have been featured in numerous magazines including: L’Officiel, Vogue, Vice, Elle, GQ, i-D, Nylon and Tatler, among a host of other publications. She has a knack for capturing the essence of youth, fashion and sexuality, resulting in vivid snapshots that display a positive surrealism.

Her exuberant and arresting pieces have been displayed at solo and group exhibitions around the world. In a recent interview with a well-known photography blog, Kate revealed she draws inspiration from browsing photography websites and studying the work of already-established photographers including Mario Testino, Terry Richardson, Helmut Newton, Guy Bourdin, Tracey Emin, and her personal favorite, Jean Michel Basquiat. In the same interview she also divulges a passion for on-location photography. “Location, location, location!!!  I love being able to use a new setting in every picture and explore different places.”

In her signature playful and carefree style, Bellm has shot editorials for megabrands Kitsune, Adidas, Nylon, Harrods, MTV, and T-Mobile (to name a few). She advises budding photographers to take as many pictures of friends and family as possible, and not be too afraid of asking questions; a trait that she says ‘most helped her learn the tricks of the trade’.