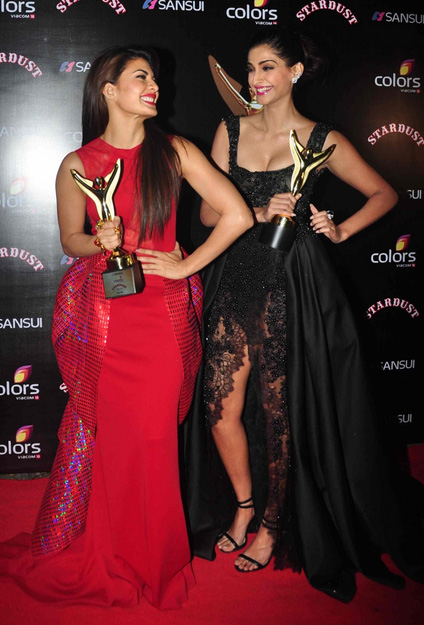 The year 2014 has been rather remarkable for Bollywood – now it’s time to commemorate!

Yesterday’s Stardust Awards in Mumbai officially kicked off this year’s award season. Sansui, Colors and Stardust come together for the first time to bring us this ostentatious awards occasion. The 12th edition of Sansui Colors Stardust Awards night witnessed the presence of the biggest Bollywood celebrities who collectively reenacted this year’s most entertaining on screen instants.

Although Farah Khan’s ‘Happy New Year’ was slammed by critics – as a rip-off of the Hollywood hit ‘Now You See Me’, it still managed to clinch the highest number of trophies at this year’s Stardust Awards, including; ‘Film of the Year’, ‘Dream Director’ for Farah Khan, ‘Star of The Year – Female’ for Deepika Padukone, and – not one, but two awards for Shah Rukh Khan: ‘Star of The Year – Male’ and ‘Best Actor’.

According to The Times of India, the event was executed by the Morani Brothers’ Entertainment Company, and for 2014, the Stardust Awards teamed up with Colors and Sansui after discontinuing their partnership with Sony Max.

Speaking about the partnership, COO of Sansui, Amitabh Tiwari stated, “This association is very exciting and promising. Both Stardust and Colors stand for entertainment and Sansui for quality entertainment by offering technologically advanced televisions and mobile phones. Hence it couldn’t have been better than this and we look forward to a successful long term association.”

Raj Nayak, CEO, Colors added, “This is our first year of partnership with Stardust and Sansui, and we are collectively working towards creating this show. We have partnered with EY to tabulate and audit the results to ensure transparency. We have a great lineup of performances and I am sure that it will live up to the viewers’ expectations.”

The 2014 Sansui Colors Stardust Awards drew all of Bollywood’s royalty into one room. From actors in front of the cameras to the support staff behind them, it’s time to recognize and reward all the hard work that goes into producing these movies, that are paid little further attention to once watched.