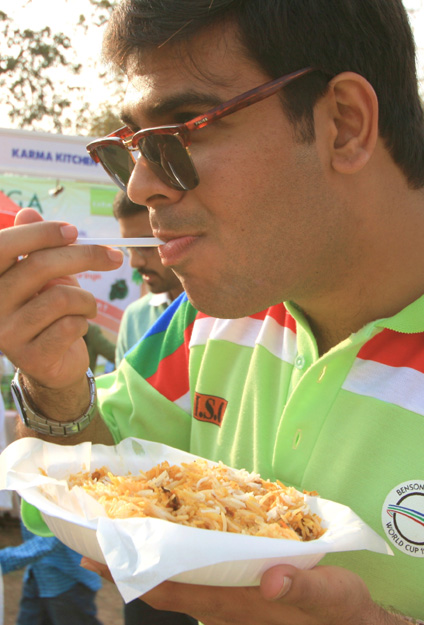 The two day, all-day event organized by Chapra Khan Omari Event Architecture saw the transformation of Frere Hall into a sort of foodie wonderland celebrating gastro-creativity in all its modern manifestations.

“We were a little bit nervous at the beginning but as you can see the response has been tremendous,” said Cyra Anklesaria, one of the organizers behind the event. “And it works brilliantly both ways because in addition to foodies, for restaurateurs’ the festival gives them exposure to a whole new clientèle they otherwise wouldn’t have…”

From China Kitchen’s Hunan Beef and Okra’s Penne pasta, to The Deli’s Ravioli and fresh sugarcane juice from Juicylicious – every want, every need had been catered for. One point even saw restaurants The Deli and China Kitchen reportedly run out of food and have to re-supply their stock before being able to cater to food-lovers, hungry for more!

“It was one of those things where I didn’t even know if we’d sell anything because you know, it’s the first time an event like this is being done,” said Ghazala Malik, Managing Partner at China Kitchen. “And then before you know it we’re all sold-out of food, and there’s a long line of people still standing, waiting… And so I ordered new stock.”

Aimed at uniting the most creative and talented street vendors, celebrity chefs and food enthusiasts to celebrate the diversity of food Karachi has to offer, Chapra Khan Omari Event Architecture sought to create a festival that would revive the old community spirit, once so reminiscent of this great city of ours.

And with a turnout in excess of fifteen thousand people… It’s pretty safe to say they succeeded.

When asked what’s next for the organizers of the event and the future of the food festival, Anklesaria smiled, but was careful not to give anything away. “What’s next?” she repeated. “I guess you’ll all have to just wait and see..!”