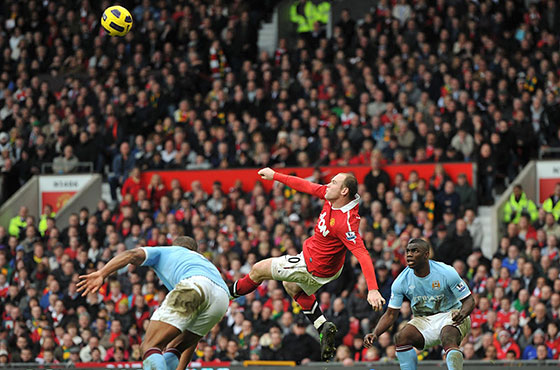 What to Expect from City vs. United this Weekend

With seven gameweeks remaining till the end of the Barclays Premier League season, every match promises to be a thriller. Of all the matches, nothing comes close to the Manchester Derby- Manchester City vs. Manchester United. The red and blue sides of Manchester will meet at Old trafford this Sunday for an all-star face-off. This is not just for pride and glory but for securing three points that will see one of the sides maintain their top-four place and the other possibly losing it. Manchester City very recently lost by a goal to Crystal Palace in a match they were expected to win fairly easily.

The Citizens’ confidence would be low after their loss to a side that is in the bottom-half of the table. Manchester City will have the home advantage but Louis Van Gaal’s Red Devils have been on a roll recently. United won by two goals against Aston Villa at home and are separated by a point at third place from City who lie in fourth.

The last time both sides met, City won by just one goal. This time, the stakes are higher. A win on Sunday for United would move them in pole position near the end of the season to secure a third place finish or higher. City could win the match and take that advantage away from the 13-time Premier League Champions.

Manchester United also won a crucial encounter against Liverpool at Anfield which added more misery to Brendan Rodger’s side. With momentum on United’s side, one wouldn’t begrudge victory from them. City will need to make sure Sergio Aguero, David Silva, Yaya Toure and company are on form because this is one match that could define their season. On the flip side, United Captain Wayne Rooney will need to put in a performance for their home fans. Could Rooney score another overhead beauty that he did when the same sides met back in February 2011?

Louis Van Gaal has already proven himself better than his predecessor David Moyes and has transformed United into the winning outfit they deserve to be. So who will take pride, glory and three points at home on Sunday?  We will just have to wait and see…