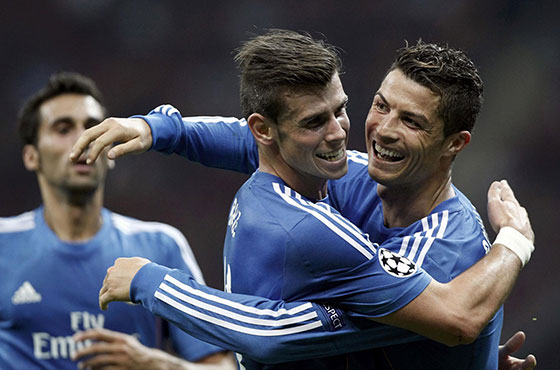 United to Blow £245m on Bale and Ronaldo?

Cristiano Ronaldo is reportedly far from happy at Real Madrid which means he could be available for a move in the summer. According to Metro, the three-time Ballon d’Or winner along with Welsh prodigy Gareth Bale are linked for a move to Manchester United.

According to The Daily Star, in order for the Red Devils to bring in two of the world’s biggest stars to Old Trafford, they are willing to spend a total of £245 million which will come from their £5 billion television deal.

The Daily Express reports that the 13-time Premier League champions are set to bid for Madrid’s finest come this summer. Ronaldo had played for Manchester United prior to joining Madrid in summer of 2009. His return ‘home’ would cost United £150 million reportedly. Bale will be an additional £95 million.

Could this happen? Both Bale and Ronaldo are major stars at the Santiago Bernabeu. Last season, Bale helped his teammates win their tenth UEFA Champions League silverware. Ronaldo this year was awarded his third Ballon d’Or. Any move away from Madrid for either of the two players will be a step down.

Football is the beautiful game and anything can happen. Will United boss Louis Van Gaal be able to close these deals and bring possibly the two of the best players in the world to Old Trafford this summer? We will not be holding our breath!