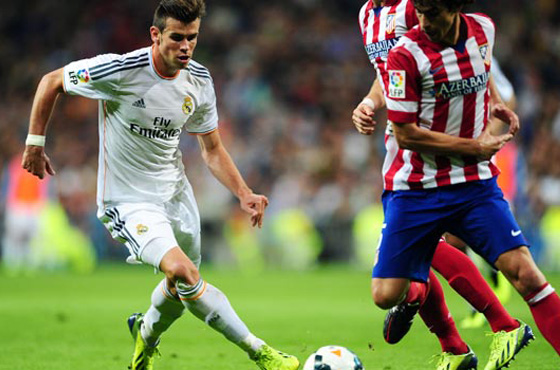 As the season comes to an end and footballers ready themselves to join their respective national sides for the 2014 FIFA World Cup, there’s still one final the football world is eagerly waiting for.

This year’s final of the UEFA Champions League will be held in Lisbon on May 24, and is set to be a helluva showdown between two of footballs best sides – Real and Atletico Madrid. Considering the line-up it’s safe to say Madrid is home to the two best teams in football right now…

Last year we saw a German final that ended with powerhouse Bayern Munich lifting the Champions League trophy beating out rivals Borussia Dortmund. This time around, it was Spanish powerhouse Real Madrid, led by the magnificent Cristiano Ronaldo that dethroned Bayern in a convincing semi-final victory.

At the same time derby rivals Atletico qualified for the final after vanquishing Jose Mourinho’s Chelsea in the semis. Atletico have been brilliant this season in La Liga and could be possible champions later this year. However, they now have to contend with Real Madrid for glory both at home and in the European final.

Real Madrid managed by Carlo Ancelotti, appear to be the favorites to win. Real boast a strong line-up of top-notch talent including Gareth Bale, Karim Benzema, Sergio Ramos and of course Portuguese sensation Cristiano Ronaldo. Atletico on the other hand, will see Diego Costa spearhead the attack. His superb form this season has attracted the likes of other European clubs and he has reportedly been linked with a move to Chelsea.

Atletico Madrid will also feature midfielder Koke and former Barcelona striker David Villa. Goalkeeper Thibaut Courtois, who is currently on loan from Chelsea, has been in great form behind the goal even against his parent club in the semi-finals.

While Real Madrid are looking for their tenth European title, some neutrals would want Atletico to win. Real Madrid have always benefited from a huge transfer budget spending as much as £100 million to secure the world’s top players. The final should be intense with Ancelotti’s men fully-aware that it was Atletico that defeated them in the Copa Del Rey final last year, in a fierce encounter where both sides were reduced to 10 men.

By the time May 24th arrives, the La Liga title will have been decided. If either of the Madrid clubs win they may have a psychological advantage heading into the European final. Upsets are known to happen in any sport and the UEFA Champions League is no different.

The countdown to Lisbon is on and irrespective of which side wins, there are sure to be fireworks in Madrid!