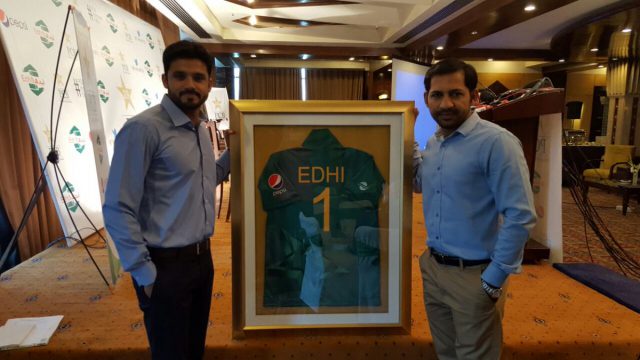 Finally the PCB got something right, and all of Pakistan will be standing behind them on this one. The cricket board announced yesterday that on the Pakistan team’s forthcoming tour of England, their playing kits will bear the monogram of the Edhi Foundation.

The decision to honour the nation’s foremost and most honest philanthropist comes in the wake of reports that Abdul Sattar Edhi is seriously ill, undergoing treatment at a hospital in Karachi. The man with a heart of gold, who has been serving humanity since his early years, won even more respect recently when he refused an offer from Asif Ali Zardari to pay for his treatment abroad, saying he preferred to remain in his homeland and get the medical care fellow ordinary Pakistanis are given — a slap indeed for our callous rulers, if only they were sensitive enough to see it as a rebuff.

Misbah-ul-Haq, Azhar Ali, and Sarfaraz Ahmed, the captains who will be leading the Greenshirts in the three formats of the tour, also paid tribute to Edhi, saying the display of the logo will promote the cause of peace and Edhi’s heroic contribution to it.