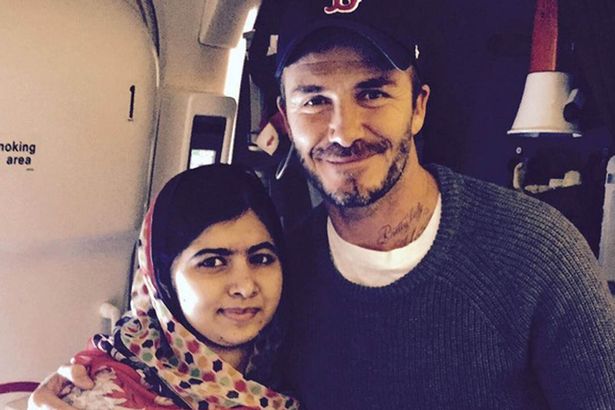 David Beckham Reunites With Our Very Own Malala

From pop stars and rockstars, to billionaire philanthropists and world leaders, Pakistani Nobel Laureate Malala Yousafzai has had a lasting effect on everyone.

The 18-year-old activist for female education recently reunited with football superstar David Beckham, two years after their first encounter. Beckham who considers Yousafzai to be among the most inspirational personalities in the world, was quick to upload a photo of the two together on his Instagram account with the message, “I was fortunate again to meet the incredible and inspirational Malala.”

The two celebrities first met in October 2013, when Beckham presented her with the Pride of Britain Award. Their most recent meeting occurred after she attended the Global Citizen Festival in New York alongside America’s First Lady Michelle Obama, and Jay-Z’s First Lady Beyonce Knowles.

But for Malala that wasn’t it… The inspirational teenager was praised for the incredible work she’s been doing by billionaire philanthropist and Microsoft co-founder Bill Gates who too, shared a photo with her.

He was quoted saying, “We’re lucky to have such a passionate advocate for women and girls. My daughters are going to be jealous of this photo.”