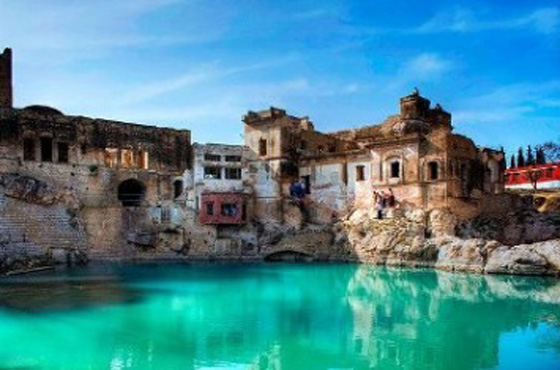 The Hindu temple Katas Raj continues to outlive the Hindu Kings who established it eons ago. Located on the main strip from Lake Kallar Kahar in the Chakwal district of Punjab, the temple is a real treat for history-buffs. By car, it is only a two hour drive from Islamabad.

The Katas Raj consists of several temples built between the 9th and 11th centuries when the Salt Range was part of Kashmir. It is considered the second most-revered Hindu temple after the Jwalamukhi, located on a small spur on the Dharamsala-Shimla strip.

Until recently, the Katas Raj was in rather derelict condition due to the environmental impact of nearby industries and the disappearance of most of its relics at the hands of smugglers. The good news however, is that renovations are currently underway courtesy of the Punjab Archeology Department, who reportedly contributed a lump sum of nearly Rs.600 million towards its restoration.

According to Ahmad Aziz Tarar, Coordination Officer from the Chakwal district even a water channel has been constructed to ensure a clean water supply to the Katas Raj pond, known as Shri Amar Kund. The Hindus believe the pond was formed by the tears of Lord Shiva, the god of destruction and transformation, when he mourned for the death of his wife Parvati. Consequently, it is said anyone who bathes in the pool becomes “purified.”