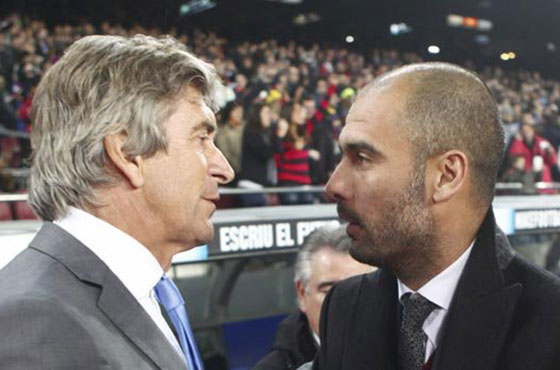 Pep Guardiola will always be remembered for his time at Barcelona when he turned the Catalans into football giants of Europe. He played a remarkable role in transforming Lionel Messi’s career. When he went to Bayern Munich, his success story continued. Under his guidance, the Bavarians have won both German Bundesliga and German Cup/ DFB Pokal silverware. Known for managing top teams, he may have already picked his next destination.

According to Manchester Evening News, Manuel Pellegrini could be replaced at the Etihad Stadium by Pep Guardiola in the future. He is “top of a very small list of coaches that the Blues’ executives would consider as a successor to Manuel Pellegrini” and “take Manchester City into the next phase of their ‘project’.”

Guardiola has 18 months left before his time runs out at the Allianz Arena. The former Barcelona player and manager could be the perfect successor to Pellegrini come the summer of 2016. Guardiola was reportedly quoted saying, “I’ve had a great time. It was a dream come true to be Bayern coach.”

From his comments, it could be said he is already making plans for his next European destination. The Barclays Premier League is an exciting league to manage and yet not dominated by Guardiola. He would have a chance to manage the defending Premier League champions and go head to head against former La Liga rival manager Jose Mourinho.

Chances of Guardiola landing a gig at Manchester City seem high he has close relations with the top brass at the Etihad. City chief executive Ferran Soriano is one of them. He was once quoted saying that “after Germany he (Guardiola) probably will come to England to coach somewhere.” He further added, “With Pep, the conversation is not about us chasing him or him chasing us. Pep and Txiki (football director Txiki Begiristain) speak regularly, maybe weekly, so that would have been an easy one.”

Bayern Munich also seem to be prepared for the day Guardiola does decide to leave. Honorary Bayern Munich President Franz Beckenbauer was quoted by ESPNFC saying, “Pep Guardiola basically does not need a contract. A coach of his caliber will leave whenever he wants to leave.”

If Guardiola does take over from the capable Pelligrini at the Etihad Stadium, we could see years of domination from Manchester United’s noisy neighbors.