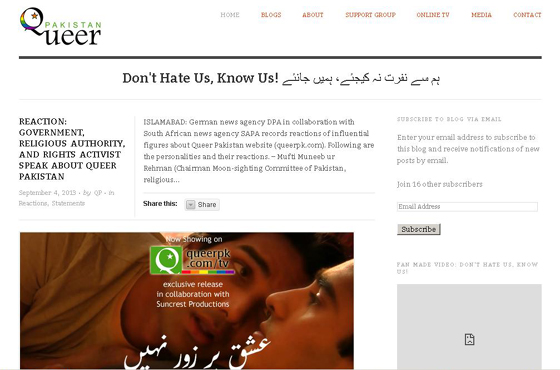 Queerpk.com, a local site set-up to help members of Pakistan’s gay and transgender community better communicate was systematically shut down earlier in the week.

Kamran Ali, spokesman for the Pakistan Telecommunications Authority, reportedly told media outlets “We blocked the website under the law because its content was against Islam and the norms of Pakistani society.”

Mr. Ali said all access to the site had been blocked after the PTA received complaints from local internet users able to access the site.

Queerpk.com’s moderator, who requested media keep his identity a secret, said he would not challenge the ban in the courts for fear of “negative” repercussions.

“We wanted to provide a platform for people who are being abandoned by society because of their sexual likes,” he told AFP. “I was not hopeful about the future of the website; I was convinced that sooner or later it would be banned.”

Homosexuality is illegal in the deeply conservative Muslim country. A recent study by the Pew Research Center in Washington, D.C found that Pakistan was among the least tolerant of homosexuality among 39 countries surveyed.

However according to the latest research, in tribal societies in Pakistan’s north-western border areas there is an ancient custom of tolerated, albeit secret, sexual relationships between men and young boys.