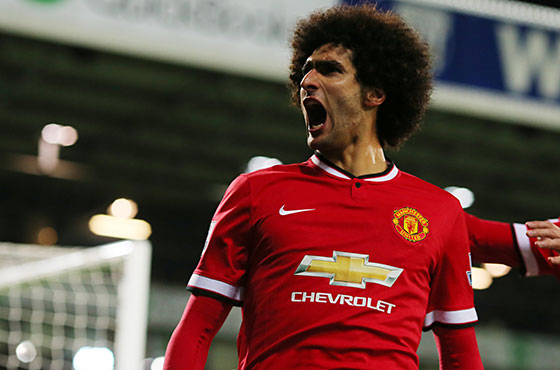 Manchester Will Always Be Red

As expected, the Manchester Derby was set to be the hottest fixture on Barclays Premier League Super Sunday and exceeded all expectations. It was goals galore, as the red side of Manchester pulled off a convincing victory from behind against their noisy neighbors Manchester City. After four losses against the citizens, Manchester United were back to prove that their city will always be red.

The match started with Manchester City at the top of their game making quick plays and getting into the United box time and again. Sergio Aguero scored a tap-in off David Silva in just eight minutes into the first half. City showed their arch rivals that they are at Old Trafford to win. Unfortunately, that was not the case. Suddenly the momentum switched and Manchester United scored a very important equalizer at the hands of Ashley Young in a crowded six yard box.

27 minutes into the match, Marouane Fellaini scored a sublime header making it 3-1 for United. The home fans got behind their men and the match was on. There were still close to 20 minutes in the first half left but City did not do enough and started the second half with 45 minutes to save the match.

Both City and United tried to outdo each other but the 67th minute strike from Juan Mata sealed victory for the Red Devils. The happiness on the former Chelsea man was a sight to behold. United poured more salt on their rivals’ wounds in 73 minutes with a goal from defender Chris Smalling. Aguero struck back for City with his second and 100th goal for his club which was nothing more than a consolation.

The match ended 4-2 with Louis Van Gaal ecstatic with a much needed victory against the defending champions. Manchester City went back to Etihad wondering where it all went wrong. City boss Manuel Pellegrini’s career is surely on the line now and if results don’t improve in the remaining six games, then the sack likely awaits his fate.

At the end of the day, it was a great match for neutrals and United supporters were happy that Van Gaal is the right man to take United back to glory.