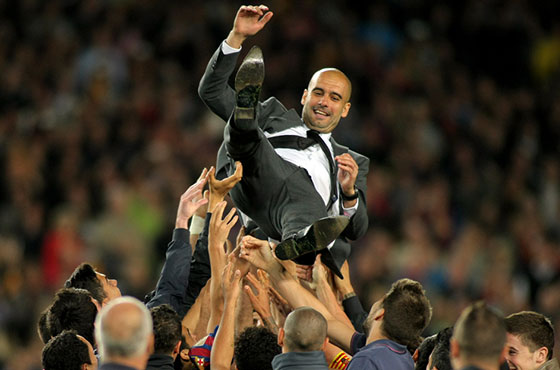 Manchester City to Move in for Guardiola and Sterling?

Could it be that Manchester City is suffering the championship curse once again? Last season Manuel Pellegrini guided the Citizens to their second Barclays Premier League title in two years. This season, City has been behind league leaders Chelsea most of the time. Worse, they are now struggling to keep their top-four spot after a 4-2 loss to arch rivals Manchester United last weekend.

This is no different than the time when Roberto Mancini was the boss at Etihad Stadium. A season after winning the Barclays Premier League title with City, he was sacked. The same fate could await Pellegrini if City drops out of top-four places at the end of the season. City’s management has always seemed to show discipline when it comes to managers not meeting season targets. A second place in the Premier League would not have been all that bad, but now even fourth spot seems to be a question mark.

It seems that Pellegrini will not be around next summer to manage City. So who would take his place? According to ESPNFC, Pep Guardiola seems to be the logical option. The Spaniard’s contract with Bayern Munich expires next season, so City could tempt him to take over the reins from Pellegrini in the summer. The City hierarchy seem to be admirers of Guardiola’s talent so it is possible that the former Barcelona manager make his debut in the Premier League in the coming season.

One of the reasons for City’s unimpressive performance in recent times is that their squad is aging and are in need of fresh and young talent. This season, the one youngster that has impressed is Liverpool’s Raheem Sterling. Without the attacking talents of Luis Suarez, Sterling has been on the forefront of Reds’ attack. He is a very important part of Brendan Rodgers’ squad. However, the 20-year-old has refused to extend his contract at Anfield. According to the Mirror, the 20-year-old was offered £100,000 a week by Liverpool which he rejected. He was also in the headlines recently for the wrong reasons. He was filmed inhaling legal high nitrous oxide and also made some questionable comments in an unauthorized interview.

It looks like Sterling, like Suarez, is looking for pastures new. City has the budget to offer him the wages he wants from Liverpool and are better suited to win silverware than Liverpool in recent years. It likely that City would offer Liverpool over £30 million for Sterling’s services. The Daily Mail reports his price tag to be £50 million.

Could Manchester City go for a double swoop and bring in both Sterling and Guardiola? Sterling would work great alongside Sergio Aguero and Guardiola is known to guide well-built sides to championship glory. Guardiola was handed a readymade Bayern Munich squad that had also just then won the UEFA Champions League. He continued to bring silverware and league titles to the Allianz Arena and may be looking towards a new challenge. City is ripe for the offering so we will have to just wait and see…